“His style will go well everywhere because he tells it like it is,’’ said Republican John Bennett (pictured, center). “I’m not sure all of his politics will fly in those states.’’

But Christie has one card to play that can’t be ignored and could demonstrate his ability as a tactician.

Bennett reminded the audience here that Christie will chair the National Governors Association and that next year 36 governors will face election.

“He will be engaged in most of them,’’ Bennett predicted. “He will travel a great deal.”

From across the aisle, Democrat Jim McGreevey said Christie is needed to rescue a GOP that has been hijacked by the tea party.

He reminded the audience that this is the party of Lincoln we’re talking about.

“It’s almost unfathomable that one of the great political parties of our nation has lost its way so profoundly,’’ McGreevey said.

In regards to the direction that Speaker John Boehner and Texas Sen. Ted Cruz want to take the country, McGreevey said: “it’s nuts.’’

“The nation is stronger with a sane, rational Republican Party,’’ said McGreevey. 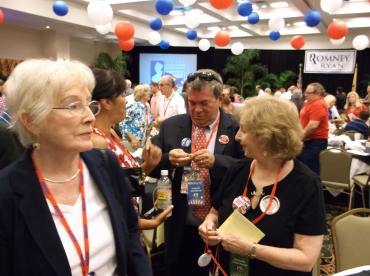