HACKENSACK – The opening words of the 2014 Bergen County Executive race were few, but spoke volumes.

“I do not wish to comment on that race at this time,” Bergen County Republican Chairman Bob Yudin told PolitickerNJ.com when asked about GOP incumbent Kathleen Donovan’s chances next November. “I won’t even talk to you on background.”

The fact that the normally-voluble Yudin did not immediately defend the top of his party’s ticket for the next election appears counter-intuitive unless the Gordian knot that is Bergen Republican politics is considered.

Donovan and Yudin have been longtime rivals for control of the Bergen Republicans, a battle magnified by the fact that Bergen, New Jersey’s most populous county, is seen as the bellwether county in statewide elections. The flak between the two was evident three months ago, when Donovan, the county’s top Republican elected officeholder, was not listed on the host committee set to greet Gov. Chris Christie at a Bergen County Republican Organization fundraiser in August.

This perceived cold shoulder adds to the problems faced by Donovan. She must contend with lingering lawsuits borne of the struggle between Donovan and the county freeholders over plans to merge the Bergen County Police Department and the county’s Sheriff”s Office. Donovan is opposed to the plan, while the majority of the freeholder board, now controlled by the Democrats by a 4-3 margin, support the move. During her battles with the freeholder board, Donovan has used her veto power more than 25 times since taking office in January 2011.

Despite both partisan and intra-party challenges ahead, Jeanne Baratta, Donovan’s chief of staff, vetoed the idea that Donovan would step aside.

Although the Bergen County Democrats have yet to select their candidate for county executive, Donovan must deal with another unique hurdle in 2014. The top of the Democrats’ ticket will be held by U.S. Senator Cory Booker, who will run for a full six-year term. Booker, who grew up in Bergen’s Harrington Park, carried the county in the special U.S. Senate election in October by a 20,000-vote margin over GOP challenger Steve Lonegan.

But Baratta cited one of Booker’s main political allies when assessing Donovan’s chances next year.

“Kathe Donovan won re-election as county clerk in the Obama landslide [in New Jersey],” said Baratta, referring to the joint appearance of Donovan and U.S. President Obama on Bergen ballots in 2008. “Obama was a huge vote-getter in Bergen County, yet Kathe Donovan won. We’re not concerned about Cory Booker’s name on the ballot at all.” 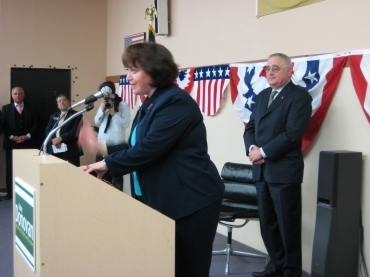