HACKENSACK – Bergen Republican Chairman Bob Yudin defended his reputation on Friday, calling Democratic claims of victory in the 2013 election cycle “spin” while continuing to assert that the ongoing civil war among Bergen Republicans is not his fault.

“The Bergen County Republican Organization had an overwhelming victory in this past election, and the Democratic Party in Bergen County suffered a huge defeat bordering on humiliation,” Yudin said in response to a recent PolitickerNJ.com interview with Bergen Democratic Chairman Lou Stellato during the New Jersey League of Municipalities conference in Atlantic City.

In a Nov. 19 interview with PolitickerNJ.com, Stellato noted that Christie failed to take out state sen. Bob Gordon (D – 38) despite the governor’s big win, and that the Democrats gained a veto-proof five-to-two advantage in the freeholder board.

“There were five elections in the county this year: the governor, the sheriff and three freeholders. The Republican Party won four out of five of them, and the one we lost we lost by a razor-thin margin,” responded Yudin, referring to the very close defeat of GOP Freeholder John Mitchell. “I will take those kind of wins anytime.”

Yudin also singled out the top of the ticket when assessing the 2013 election.

“We could not have done this well without Gov. Christie’s support,” said Yudin, pointing out the governor’s 50,000-vote plurality in Bergen. “I am forever grateful to the governor. Knowing how difficult a task it was, he didn’t hesitate to help us in all respects.”

Mitchell’s narrow defeat sparked controversy among Bergen Republicans after Yudin stated in a Nov. 17 letter addressed to Bergen Republican leaders that “if [Bergen County Republican Executive Kathleen Donovan] had advocated everyone, all three Republican Freeholders would have won.”

“I’m not denying that there’s division in the party,” Yudin said to PolitickerNJ.com on Nov. 18. “A weekend before the election, the county executive was part of a bullet e-mail campaign for [Freeholder] Maura DeNicola. She sent out an email that said ‘Vote for Maura.” She didn’t say vote for [Freeholders John Felice and John Mitchell]. That’s despicable. I did everything for the whole team.”

When asked if writing the letter was necessary given his claims of GOP dominance in the last election, Yudin verbally shrugged his shoulders.

“During the time that I have been chairman, you have never once seen me criticize my elected officials,” Yudin said. “That letter to the county committee is not a criticism. That is reporting to my county committee what happened after people asked me why did Mitchell lose. I’m not the one who did that. I’m just the messenger. Shooting the messenger is not the answer.” 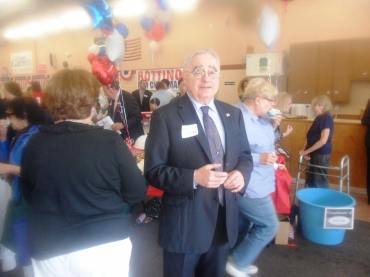