“I’ve wanted to be a Knicks City Dancer since attending my first game as a young girl,” rookie dancer Courtney Chung told me when I recently crashed a series of practice sessions at Madison Square Garden.

Unlike Ms. Chung, and the hundreds of other hopefuls who descended on NYC this past June to try out for one of the team’s coveted 20 spots, each woman must be at least 18 years old, have eight-plus years of dance experience and was told to supply her own knee pads, and snacks for the audition—I had simply placed an email to a Knicks PR rep, and now I was getting ready see if I could hang with the ladies of the dance squad.

How hard could it be, I figured?

The halftime and time-out moves that look so effortless from the stands are damn near impossible for any novice to pull off. I learned this the embarrassing way, as I was placed front and center. I am an experienced dancer, trained since kindergarten in ballet and was committed to succeeding—I even wore team colors—but within five minutes, I was panting and writhing in pain, and we were only halfway through the first 10-minute routine, which consisted of a combination of pilates, stretching and core strength training. I lost my balance a few times and almost pulled my hamstrings. The Knick City Dancers reach for the top. (Jordyn Taylor)

The official tryouts, this past June, saw more than 500 hopefuls showing up to audition from many states and even other countries. One aspiring dancer came from Japan arriving literally five minutes late. The audition room doors at Chelsea Piers had been shut. Crying hysterically and frantically, she was allowed to enter despite her tardiness.  She danced her little tush off and advanced to the third cut before she was sent home.  Everything came full circle; she left in tears.

Four cuts are made over the weeklong process, winnowing the 500 down to 23 hopefuls. Then the 20 members of the team find out on the spot that they’ve made it. It was a dream come true for rookie Courtney Chung. Five hundred will try out; only 20 will make it. (Jordyn Taylor)

“When I made it, I was immediately overwhelmed with tears of joy and disbelief. I’ve wanted to be a Knicks City Dancer since attending my first game as a young girl. So I couldn’t believe that I achieved what had seemed like such an impossible dream.” There’s not much time for starry eyes. Contracts are signed, media training is completed, and measurements are taken for the 11 different uniforms the dancers will sport over the season. Then biweekly rehearsals start in August and continue throughout the season.

This year’s co-captain, Alyssa Quezada, is a University of Delaware grad. She originally planned to participate on the team for only a year, but three years later, she’s still here, presiding over rehearsal from the back of the room, noticing every misstep. “I actually believe that it’s harder to make the team again than it is it the first year,” Ms. Quezada said.

When we moved on to a new routine, I almost believed that I was picking up the choreography as quickly as the others were—perhaps because the first steps of the routine were literally steps. But these steps quickly morphed into some hard-core kicks and spins, and I quit while I was ahead, though the girls showed no signs of slowing down. They’ve been practicing twice per week since August, and they have 13 routines nailed.

“I would say the biggest misconception is that we are cheerleaders,” said Kelly Volz, a fourth-year team member, whose full-time job is as a graphic productions associate for CBS This Morning.

Being an amazing dancer is important, but so is the ability to get along with others and even to speak well. These girls not only represent the Knicks; they also represent Madison Square Garden. It’s clear that they have some serious heads on their shoulders.  Christine Barton, a fourth-year member, works for the Department of Justice in Washington, D.C. Even though she resides in Maryland, she makes the four-hour commute to New York for every home game and rehearsal. When Hurricane Sandy hit last year, she was determined to get to the city as soon as possible. “Transportation was very limited getting in and out of New York because of flooding. I was able to get on the last bus from Washington, D.C., to New York the morning after the storm. It was amazing to see that the Garden still had a full house for that game.”

There are other misconceptions as well, like love connections between the dancers and the players. On the contrary, no foul play allowed, as every NBA team has a written rule against fraternization. (Hoops stars have to find their groupies elsewhere.)

As for weigh-ins and “fat lists,” some NBA dance teams do have requirements that a dancer’s weight must not deviate by five pounds, but every franchise is different. It was neither confirmed nor denied whether the Knicks City Dancers have such a clause, but I hope they don’t, because while I know now that I have zero chance of dancing on center court, I definitely brought a lot of snacks. 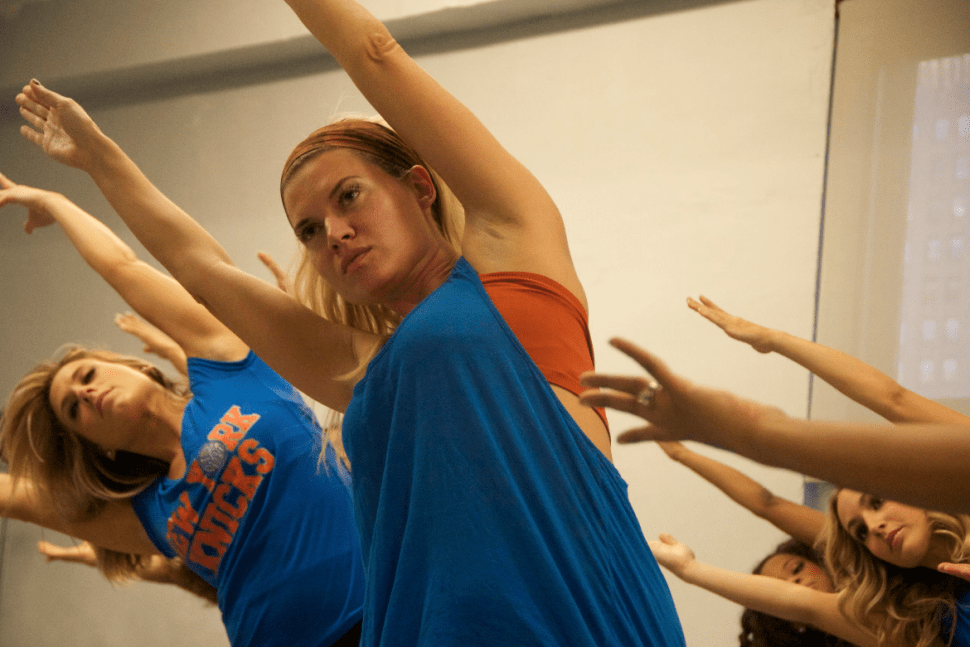