“He loves Somerset County,” said the vice chair of the party, Zenon Christodoulou, as the new U.S. Senator waded into a roomful of hugs and hand clutches.

The fact that Booker almost won but didn’t motivates him now to turn the county blue next year when he runs for a full six-year term.

But there’s first an election on Tuesday night and local party members determined to make a statement.

Many of them believe they can win.

Chairman Peg Schaffer outfitted Booker with a table and chair – right next to LD 16 Assembly candidate Marie Corfield – and promptly put him to work in a crowd of party rank and filers who have long been gnawed at by the knives of fate.

They sense a champion in Booker.

And they see a champion in Corfield.

The senator tried his hand at three calls to party regulars on the other end of those phone lines and went to voice mail three times and told whoever it was he called in the most generic terms to vote for “Democrats.”

The Democratic State Committee and the state New Jersey Education Association (NJEA) are committed to Corfield’s candidacy, and have pumped thousands of dollars into the 16th to propel her to victory in her challenge of Assemblywoman Donna Simon (R-16).

Corfield had a network TV ad up last night prior to Saturday Night Live on NBC.

But her feisty brand of pro teachers’ union politics, which once put her face-to-face with Republican Gov. Chris Christie – had Booker in broad brush mode tonight.

“Marie is unbelievable,” Booker declared at one point.

The fact is Booker, a proponent of vouchers backed by Educational Excellence for Everyone and a fierce bipartisan ramrodder – with Christie – of merit pay for teachers in Newark – has arguably less in common with Corfield on her signature issue than the senator shares with his cross the aisle ally Christie.

But tonight was about personality, an ebullient one in the case of Booker, charging electrically into the small room, while simultaneously brick and mortaring goodwill to turn his own striking distance performance this year into blue 2014 solidification.

“We are building in this county – every election,” said Booker, standing in a tableaux of Democratic candidates that included Keiona Miller, a North Plainfield councilwoman running for Somerset County freeholder.

People in this room tonight believe Corfield will kayo Simon.

But a Democratic Party source told PolitickerNJ.com that Christie on his last weekend before Election Day has masterfully unified his party to put it in the best possible position to break through the stranglehold of the legislative map and gut some GOP wins.

Democrats, on the other hand, are hardly united, with a gubernatorial candidate in Barbara Buono who creates rapidly striding steps in the opposite direction among battleground combatants, and incumbents shrinking into their own foxholes amid a muddle of mixed messages and trust in district-wide branding.

“It’s unity for the GOP versus individuality for the Democrats,” the source groaned.

Glowing with the same bipartisan fervor that has characterized the campaign work of Democrats hoping to avoid a sudden Christie bulls-eye on their backs, Booker in this roomful of long-suffering party members said, “If I needed a party I’d have people over,” adding that what New Jerseyans need is for people to unite around ideas.

In the next breath, he eulogized the late Essex County Democratic Chairman Phil Thigpen, who was buried yesterday, the consummate party organization man.

For her part, Miller the young comer in a bad year for Democrats with Christie running atop the ticket in a county where last time he savaged Jon Corzine 56-34%, tried to muster a game face heading toward Tuesday.

She specialized in the 400, a race that combines speed and stamina.

“There are more registered Democrats than Republicans in Somerset County,” she said amid the hoopla around Booker. “I’m dedicating myself 100% to this campaign.” 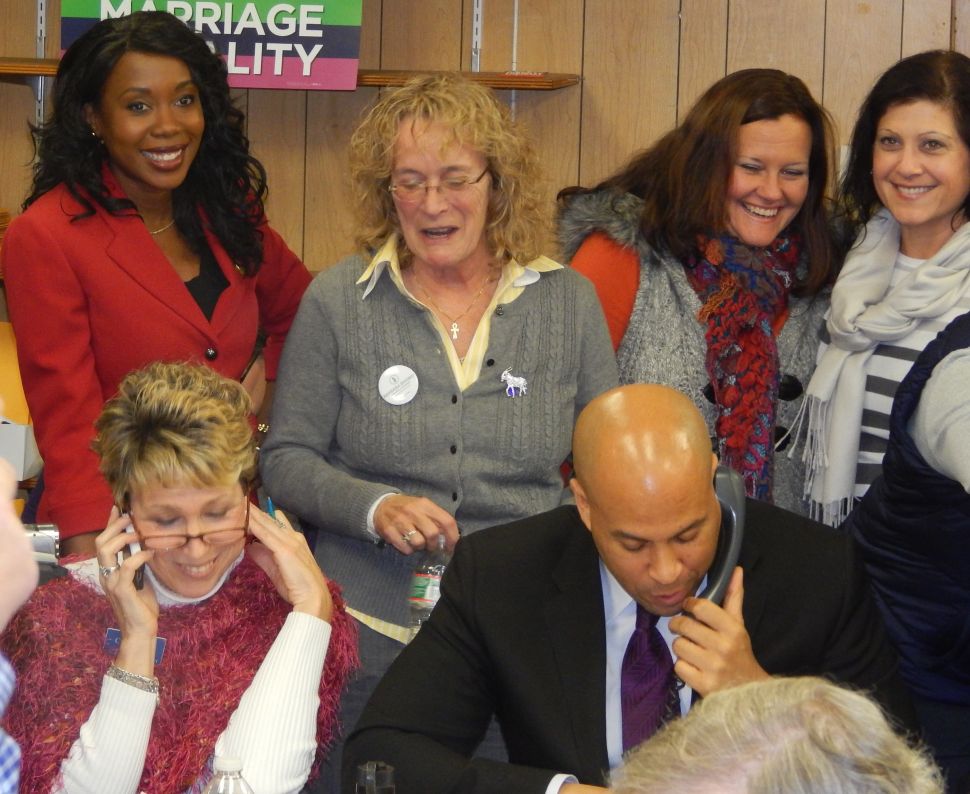