The state lawmaker said he has nothing but appreciation for the Republican governor and that comments he made on the radio Wednesday morning about Christie not doing enough to help South Jersey legislative candidates in the election were misinterpreted.

“I have not listened to the hour-long interview but that is certainly not what I meant,” Brown told PolitickerNJ.

“I know during the majority of the interview I expressed my appreciation of the governor and his efforts to revitalize Atlantic City and how he changed the dialogue in Trenton,” he said. “And that’s it.”

Brown was reacting to comments he made during an hour-long interview on the morning talk radio show Hurley in the Morning on WPG Talk Radio 1450 AM, hosted by Harry Hurley.

“What he said was that Gov. Christie made a deal with George Norcross and the Democrats and that he did not raise money for the Atlantic County candidates,” Hurley told PolitickerNJ following the interview.

“I think he has great respect for the governor and I don’t think he thinks that there was any deal,” said Assembly Republican Leader Jon Bramnick (R-21).

The backlash among fellow Republicans was swift following the interview.

Bill Layton, chairman of the Burlington County GOP, said, “When you and your running mate finish an election with over $200,000 on hand, you have no one to blame but yourself for losing the election.”

Brown won re-election and his running mate, Assemblyman John Amodeo, is down by less than 40 votes. Republicans are seeking a recount.

Northfield Mayor Vincent Mazzio is up over Amodeo.

“Just because the governor is a popular governor doesn’t mean you don’t have to run a campaign,” Layton said. “It’s ridiculous to think he’s somehow responsible for John Amodeo’s loss.”

Brown’s comments also spurred another Republican assemblyman who shares the same name to clear the air about which Chris Brown was making the comments. 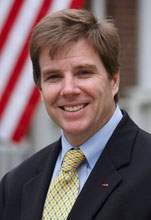