Florio got right to the point and called it “folly’’ for Buono to have repeatedly made an issue of the fact Christie was interested in a presidential bid in 2016.

“It’s a commentary on how naïve her campaign was, to put all that emphasis on attacking the governor because he has higher aspirations.”

But they agreed her campaign was probably doomed much earlier, possibly the day after the previous election ended.

McGreevey and DiFrancesco said a gubernatorial campaign takes an incredible amount of personal sacrifice and time, especially for a legislator whose name recognition doesn’t extend much beyond their own district, even if it reaches that far.

“It’s very difficult to launch a statewide bid from a legislative seat, almost impossible,” McGreevey said: “Everyone knows their local mayor” better than they know their state legislator.

“You better have been preparing for this for a while, you have to be all over the state before you declare in a race like this,” DiFrancesco said.

“You better be organizing, have the party behind you. She decided to run when nobody else wanted to run,” and that put her at a disadvantage in time wasted and support lost.

Byrne went so far as to say that he called on her in September to step aside and allow the party to put up another candidate.

“I don’t think she was making any progress at all and you could see it in the polls,’’ Byrne said.  “We couldn’t have beaten Christie this year, but we could’ve put up a better candidate.’’

And a key reason she was not the best candidate, as Byrne saw it, is because he is not sure what Buono believed in or that she communicated poorly what she did believe in.

So what could she have done better? 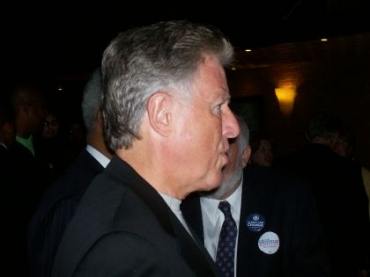