UNION CITY – Brian Stack set the stage Hudson County-style for Chris Christie’s final campaign rally in the 2013 gubernatorial race. The Democratic mayor’s workers handed out air horns Monday night to the more than 500 people jammed in front of City Hall. His police patrolled the narrow streets with machine guns, befitting the appearance of not just New Jersey’s Republican governor, but perhaps a future presidential candidate. His face was festooned on hundreds of posters emblazoned with his smiling face. And Stack’s smile stayed in place as Christie stepped up to the mic to stake his claim for four more years as governor.

“When you’re governor, and it’s in the last hours before Election Day like it is tonight, there’s lots of places all over the state where somebody wants you to come and spend your last night,” Christie said. “Every time that Mayor Stack has come to me and talked to me about the great things you’re achieving in Union City, all I’ve ever asked him is, ‘How can I be a part of it? How can I help?’ I am happy and proud to say that I am a partner with the people of Union City.”

Partnership, as well as bipartisanship, seemed to be the unspoken yet unsubtle theme of the array of politicians standing behind Christie on the podium. Stack, who also serves as a state Senator, stood close to fellow Democrat Essex County Executive Joe DiVincenzo. Both are strong supporters of Christie in an election cycle where many Democrats crossed over party lines to back the governor instead of Democratic candidate Barbara Buono.

Next to DiVincenzo stood state Sen. Kevin O’Toole (R-40), a staunch Christie ally. And alongside O’Toole was Susana Martinez, the GOP governor of New Mexico, the first female Hispanic governor in the United States and a convert from the Democratic Party.

Martinez’s presence with Christie during his last day of campaigning in the gubernatorial race added a further frisson to talk of a Christie presidential run in 2016. But first, the Garden State governor locked in on getting back to Trenton, not going to Washington.

“We want to send a shock wave through the state of New Jersey,” Christie said. “I need you to be partners with me once again.”

As he stepped off the stage in Union City, Christie seemed energized and focused as he shook hands with the surging, raucous crowd. Someone asked him a simple, point blank question: “You got this?”

“I feel good tonight, for sure,” Christie said, smiling. 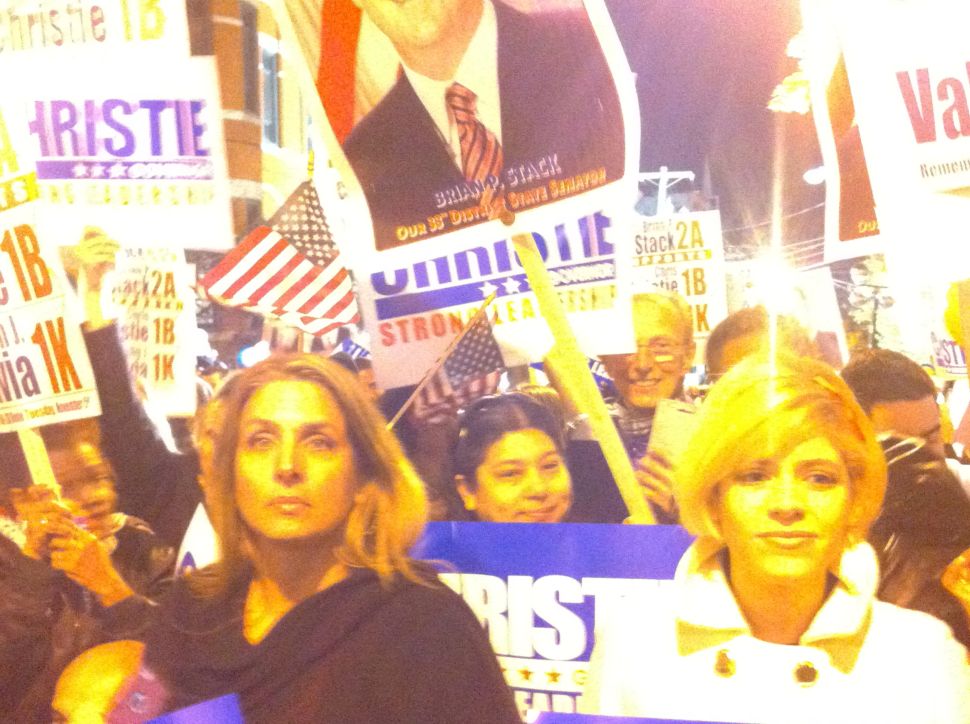