ASBURY PARK – Declaring he didn’t seek a second term in office to “do small things,” Gov. Chris Christie vowed to build on his record while in office and expand on his successes.

The governor took to the microphone before hundreds of cheering supporters in the Asbury Park Convention Hall after sailing to victory in the blue state against his Democratic opponent.

“I sought a second term to finish the job,” Christie declared. “Now watch me do it.”

The governor spoke on familiar themes and also touched on national issues when he declared the American electorate is angry and frustrated with their federal government.

“Are people really coming together?” Christie said people across the country were asking about what’s happening in New Jersey.

“Are we really working all together?” Christie asked again, saying people of every race and ethnicity are coming together in New Jersey to get the job done.

“We stood behind a podium like this and said that people were tired of politics as usual and they wanted to get things done and we promised we would go to Trenton and turn things upside down,” Christie said.

“Now listen, I know that if we can do this in Trenton New Jersey, maybe the folks in Washington, D.C. should tune in,” he said. “When we fight, we fight for those things that really matter in peoples’ lives.”

When speaking about state politics, Christie underscored what he said were accomplishments of his first term in office, including pension and health benefits reforms and changes to the state’s education system.

Christie also touched on Superstorm Sandy and promised to finish the recovery effort during his second term.

“I will not let anyone, anything, any political party, any governmental entity, or any force get in between me and the completion of my mission,” Christie said to cheers from the crowd.

“You see, for those veterans out there tonight you know how scared a mission is,” he said. “No one is ever left behind on the battlefield. … New Jerseyans will never leave any New Jerseyans behind.”

Ahead of the governor’s speech, Republican National Committee Chairman Reince Priebus and others celebrated with the governor and other GOP dignitaries in a separate room. Republican minority leaders in the Senate and General Assembly – Sen. Tom Kean Jr. and Assemblyman Jon Bramnick – were both present at Christie’s event. 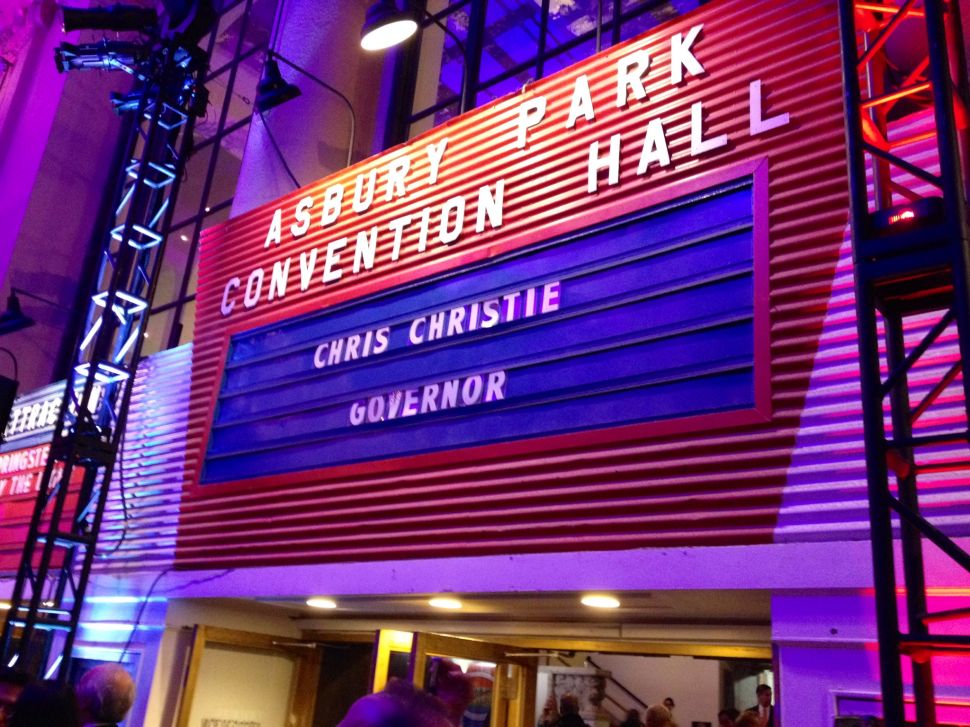