Like an express A train moving through the city—nonstop, surrounded by diversity, covering New York from top to bottom—Hillary Rodham Clinton, the former secretary of state, U.S. senator and first lady, graced our fair metropolis last week. One evening she gave a Glamour Women of the Year Award to former congresswoman Gabrielle Giffords; on another, she was at the East Harlem School 2013 Fall Benefit to honor Susan and Alan Patricof; and she even slipped into a documentary premiere.

The leading lady of American politics was all Shindigger could focus on, even as we dashed from fancy affair to fancy affair. Last Monday, for example, we found ourselves in the Waldorf Astoria ballroom at the 79th annual Metropolitan Opera Guild luncheon, as hundreds of patrons, such as Ann Ziff and Mercedes Bass, joined legendary singers like Rosalind Elias and Renata Scotto to welcome back the company’s music director, James Levine, after a two-year medical hiatus.

“He’s got a Midas touch,” operatic bass Eric Owens said of the conductor.

Did he think Ms. Clinton would have the same magical effect, come 2016, we wondered?

“She’s doing her thing, and whatever she decides to do, that’s what she’s gonna do,” the vocalist told us.

Shindigger first caught sight of Ms. Clinton later that evening, at Malaria No More’s awards gala at Jazz at Lincoln Center, where she was honored.

“Prevention and treatment are not expensive,” she asserted. “We need to stay focused and support the work of Malaria No More and others on the frontlines. We need to remember, even in a time of tight budgets, that fighting malaria is urgent, affordable and irreplaceable.”

“I’m a political junky—that’s my sport,” Gloria Allred, the feminist and activist lawyer, divulged over a glass of bubbly at the after-party, held across the street at Neue Galerie. “It very much succeeds as entertainment.”

In regard to Secretary Clinton, Ms. Allred was onboard. “Two conventions ago, I was a Hillary Rodham Clinton delegate at the Democratic Convention,” she pointed out. “So, run Hillary, run! It’s long overdue for a woman to be elected president of the United States!”

Yara Martinez, who plays Mr. Consuelos’s sexual rebound on the series, agreed. “I wanted Hillary as president,” she told us. “I’m a big Hillary fan.”

Meanwhile, Mr. Trudeau admitted he was experiencing the usual reaction to his own work: “that it’s really bad.”

As for HRC, he said, “It’s a long way off, but I want to see what her candidacy will be. I’m trying to be onboard.”

White Gold, narrated by Secretary Clinton, exposes the ivory trade, from Africa to Asia, and how the demand from China’s rising middle class is having a decimating effect on the elephant population. (Americans rank as the second largest consumers of ivory, it should be noted.)

“Nobody should ever wear ivory. We have to stop the consumer,” Arne Glimcher, founder of Pace Gallery and a producer of the documentary, said to Shindigger after the screening.

“I’ve known Hillary for many years,” the art titan continued, explaining his relationship to the narrator. “In fact, one of her first senatorial fundraisers was at my apartment. I think she would make a great president.”

Shindigger trekked next to a formal dinner at Giorgio Armani’s Armani Ristorante for Bellezza, a despairing and socially critical film set in modern Italy, highlighted by Paolo Sorrentino’s conceptual moviemaking.

“The moral lesson is that everyone has a tolerant attitude. All of us are fragile,” Signore Sorrentino explained after taking a taste of vino bianco.

And then, on our Democrat du jour, he said in a rich Napolitano accent: “I think that Hillary Clinton is very smart, and I like her.”

On Wednesday, the Society of Memorial Sloan-Kettering Cancer Center’s Associates Committee held its annual fall party at the Four Seasons Restaurant. The organization raised more than $530,000 for its newest initiative to fight pediatric sarcoma.

“I’m always very involved,” cooed hostess and longtime supporter Carolina Herrera. The designer also gave her refined approval of Madam Secretary: “I think she would be a great president.”

Our last demographic for words on HRC was an unlikely one: the leggy models at the annual Victoria’s Secret fashion show. Backstage, as the world’s most luscious and well-paid Angels got all dolled up, Shindigger weaseled through the dressing room, talking politics.

“I should not comment on that!” Lindsay Ellingson protested.

Supermodel Doutzen Kroes was grabbing a few bites of shrimp couscous when Shindigger bombarded her. The Dutch beauty had no qualms about expressing her support. “I love her!” she enthused. “I’m a really big fan. The things she did to give back—I just hope she can be the first female president. She has such strong ideals.”

“I was for Hillary the first time she ran,” top hairstylist Orlando Pita asserted. “She’s good for me!” 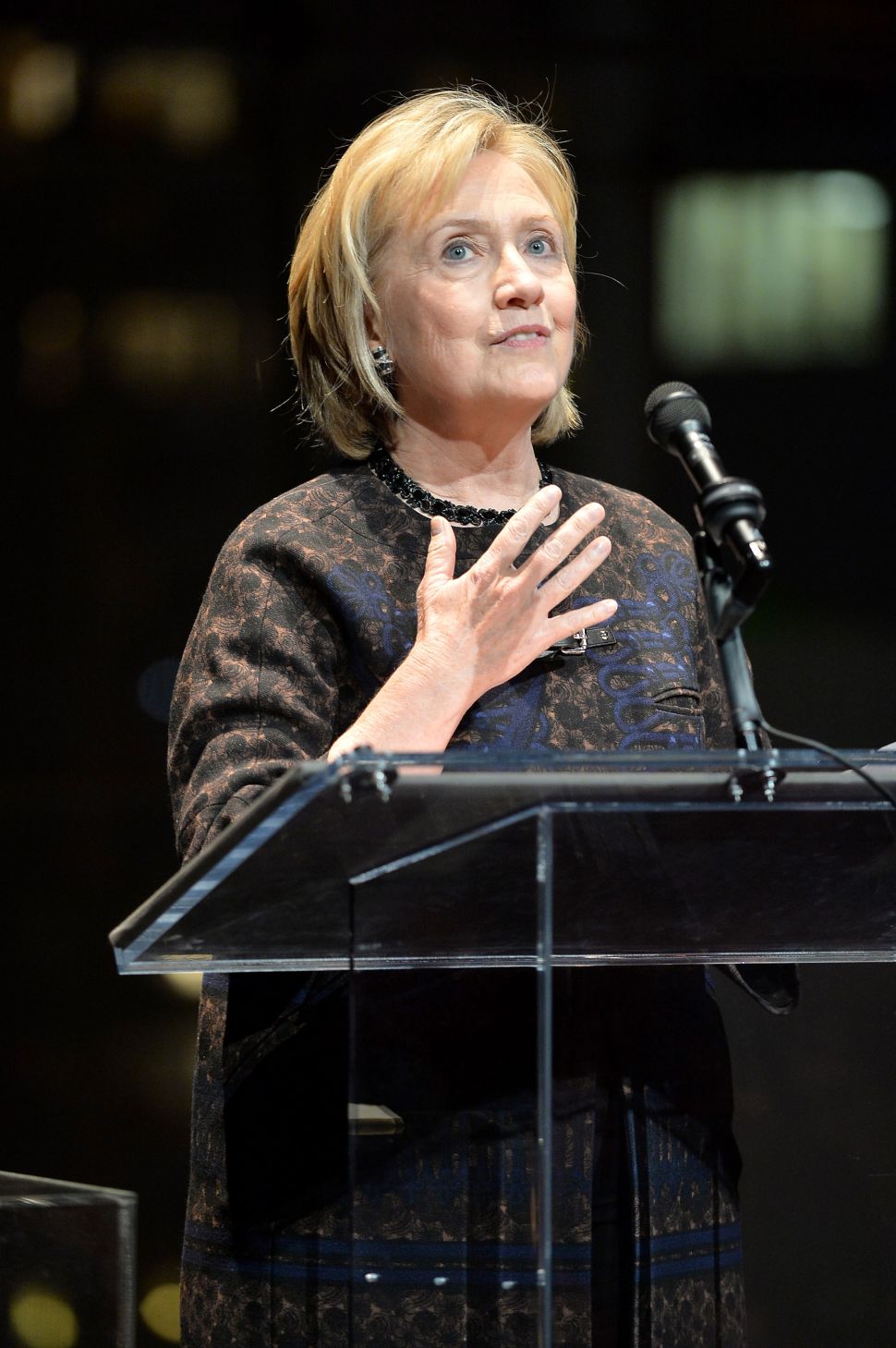