It’s a familiar scene: serious man, dark suit, official podium, stricken wife by his side. Bill Pulver, a high-ranking but unspecified public official, is stepping down after revelations about his personal life. If Jeff Goldblum, as Bill, is awfully Spitzerian—tall, angular, cocky even in disgrace—Laurie Metcalf, as his wife, Judy, is downright Sildish: a certain age, a sensible but expensive coif, an empty look. Bill, it eventually turns out, has a history of patronizing prostitutes, which has come to light because one, a very young one, fell—or was pushed, as prosecutors allege—into a bedframe and into a coma. The Pulvers go home, and Judy takes charge.

Bill and Judy are at the center of Domesticated, the bracing new drama by Bruce Norris, whose Clybourne Park won the Pulitzer Prize and the Tony Award for Best Play. It opened Monday night at Lincoln Center’s off-Broadway Mitzi E. Newhouse Theater, and it’s a tour de force: funny, ferocious and brilliantly acted and directed. Bill is an asshole; the play is fantastic.

For nearly the entire first act, we hear almost nothing from Bill, as Judy vents her anger and plots the defense—Bill is forever being cut off, interrupted on the verge of a thought, his silence a physical manifestation of his humiliation and chastening. He is facing criminal charges, so there are lawyers to recruit, depositions to take—it’s from the lawyer that Judy learns this wasn’t Bill’s only such encounter—and still, always, kids to attend to and charity functions to organize and attend. Ms. Metcalf is, as usual, excellent throughout, both wounded and commanding, flailing but in control. Mr. Goldblum does fine, subtle work without speaking. This act is an exploration of how the family copes, or chooses not to cope, with this crisis, and it’s fascinating. In the act’s final scene, Judy has gathered the family—elder daughter Casey (a sassy Emily Meade), an entitled, talkative blonde applying to colleges; adoptive daughter Cassidy (Misha Seo), quiet and asthmatic; loyal housekeeper Pilar (Vanessa Aspillaga)—to inform them of the financial cutbacks the legal expenses will require. They’ll sell the house in Brittany, Casey might need to consider less expensive colleges, and the housekeeper will be moving to a new family. (“Pilar’s going to show us how to use the washer and dryer and the vacuum cleaner,” Judy says, brightly.) Finally, Bill speaks, and astonishes everyone: He’s not happy, and he’s moving out.

In the second act, Bill finds his voice, which only compounds his problems. Tired of being dutiful, he begins lashing out in his own defense—that women entrap men, monogamy is unnatural, society is emasculating. A bar fight with a transvestite (Robin de Jesus) leaves him with a detached retina. Needing health insurance, he pleads for work at the clinic he had founded. (Bill’s pre-politics career was as an ob-gyn.) Antagonizing patients who irritate him, he gets himself fired. This isn’t entirely credible—it’s hard to believe a man who built his career in women’s health is such an unrepentant misogynist, and it’s harder to believe that a man who worked in politics doesn’t know when to keep his mouth shut. But it nicely illustrates his complete collapse, and the penultimate scene, the long-deferred face-off between Bill and Judy, is explosive.

Anna D. Shapiro, who won a Tony for directing August: Osage County and so knows her way around a disintegrating family, stages Domesticated with a fast-paced, dynamic urgency. One scene slides into the next, tension never releasing. The Newhouse has been converted into a theater-in-the-round for the production—it’s a knockout fight, after all, and the stage is the ring. And her supporting cast is as good as her leads, most especially Mia Barron as the Pulvers’ tough-as-nails defense attorney, Bobbie, who turns out to be yet one more woman with whom Bill had an affair, and Mary Beth Peil, who ably portrays a series of older-woman roles, including a therapist, the doctor who run’s Bill’s former clinic and, best, the kids’ Waspy, salty grandmother.

The play ends with Bill and Judy together, taking Casey to college. They may not be happily domesticated, but they’ve at least achieved détente. Or have they? Throughout the play, Mr. Norris interrupts the action with snippets of Cassidy’s school presentation on sexual dimorphism, the physical and behavioral differences between males and females of a species. It’s a frequently funny touch, and her parents are prime examples of the phenomenon. As she progresses, she cites examples in which females increasingly dominate their males, finally citing a deep-sea creature in which the male never reaches more than microscopic size nor even exits the female body. And it makes you wonder if Mr. Norris agrees with Bill’s more florid men-are-repressed arguments—or if we’re just lying on the canvas, rendered dizzy by this powerhouse play.

When you see it done well, it’s suddenly clear that there’s a simple recipe for a great song-catalog musical. All you need is great music, great performers, a great band and great choreography. That so many attempts go so wrong shows how difficult it is to achieve that combination. But After Midnight, a big-band song-and-dance revue of Duke Ellington standards that opened Sunday at the Brooks Atkinson, gets it fantastically right.

Conceived as Cotton Club Parade by the producer Jack Viertel for City Center two years ago, it features a swinging 16-piece band onstage comprised of players from Wynton Marsalis’s Jazz at Lincoln Center All-Stars, dynamo direction and choreography by Warren Carlyle and close to 30 toe-tapping, high-stepping dance numbers. Dulé Hill, who was the national tour’s Tap Dance Kid long before he was President Josiah Bartlet’s body man in The West Wing, is the de facto emcee, punctuating the evening with snatches of Langston Hughes poetry (and pulling off some fine footwork). He’s the star, but he takes second billing to Idolized Fantasia Barrino, who sings—marvelously—only a few featured numbers. The most memorable performances come from the ensemble singers and dancers: Adriane Lenox sultry and spunky in “Women Be Wise”; Everett Bradley all flailing, flapping limbs in “Peckin”; the coordinated group mayhem of “The Skrontch”; and on and on. The songs are well sung, well acted and well danced—and look fantastic in Isabel Toledo’s extravagantly colorful art-deco costumes.

It’s easy to see how this could have gone wrong—say, an invented Harlem love story in an attempt to create some plot, or a simplistic history of Duke Ellington, to make it a bioplay. Fortunately, After Midnight resists those temptations and instead focuses on what matters: the great songs and Mr. Carlyle’s inspired choreography. You’ll want to tap-dance your way back home.

Theatre for a New Audience has a gorgeous new home in Brooklyn, and, to go with it, a gorgeously staged—if somewhat muddled—new Midsummer Night’s Dream.

The Polonsky Shakespeare Center is a new theater in the rapidly cohering Downtown Brooklyn Cultural District. Designed by Hugh Hardy and H3 Hardy Collaboration Architecture, its glass front wall looks out on parking lots and low-slung buildings, but it’s along the block-and-change walk from BAM Harvey to the BAM Opera House, the beaux-art facade of which you can see off to the side when you gaze out of the lobby. Inside, the stairway wall features a repeated pointillist portrait of the Bard, and the theater itself is Globe-like, with a long thrust stage and two shallow balconies ringing it above a larger orchestra, although it can be reconfigured for other productions. (The restrooms, however, seem to have been designed by someone who has never tried to use one during an intermission.)

A Midsummer Night’s Dream opened the new space Sunday night. Julie Taymor is the director, her first production since the debacle that was Spider-Man: Turn Off the Dark. While her erstwhile co-author Glen Berger’s newly released Song of Spider-Man details all the confusion, contradiction and cross-purposes behind that mega musical, A Midsummer Night’s Dream is clearly, fully Ms. Taymor’s production. It is visually sumptuous and stunning, from the lone bed that Puck (a creepy, sublime Kathryn Hunter) enters and then disappears into to start the show to the projected, pulsing flowers on a billowing curtain that mark an orgasmic end to the first half to the animatronic donkey head that overtakes Bottom and bewitches Tatiana. It is all witty, inventive and gorgeous.

What it doesn’t quite do is render Shakespeare’s comedy comprehensible. This is a convoluted tale, with fairies and potions and duped lovers and three parallel plots, and Ms. Taymor’s staging, while bewitching us visually, does little to assist us narratively. But then, as Puck reminds us in the epilogue, this might be “all but a dream,” and who really expects a dream—or a Taymor production—to fully make sense? 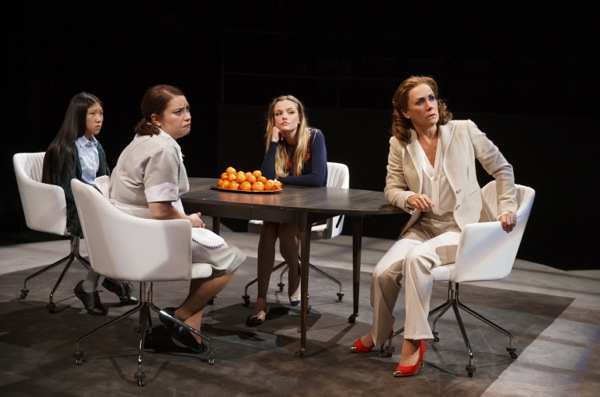