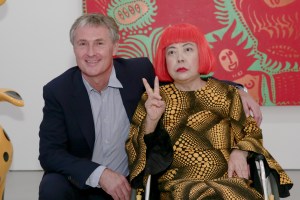 Today in The New Yorker, Nick Paumgarten offers us an impressive profile of David Zwirner. There’s plenty of great new stuff (he employs a management consultant formerly of Goldman Sachs and McKinsey & Company!), but one element of the piece solidifies a trend we’ve noticed this past year: David Zwirner loves to give quotes that praise Steven A. Cohen in the face of tons of evidence that he should probably not do that.

From The New Yorker:

Steven A. Cohen, the hedge-fund manager, whose firm recently agreed to plead guilty to insider-trading charges, and who in mid-November sold more than eighty million dollars’ worth of art at auction. Cohen had bought one of the works for sale, a Judd, from Zwirner. “I think that guy is great,” Zwirner told me. “I really do.”

Yes it’s back to the good ole days, even though this past summer, to Bloomberg Businessweek, he’d seemed to show a modicum of restraint:

I would say he’s certainly a friend of the gallery, and I wouldn’t want to talk about him in any other way than that. But this year he’s been on record making some pretty important acquisitions. He bought [Picasso’s] The Dream, which we assume is one of the most expensive paintings ever traded. Google it.

This scaled back from last year’s Art Basel Miami Beach, where his devotion was more resolute (a curtailed version of this quote also appears in a March 2013 profile in T: The New York Times Style Magazine):

“We would absolutely hate to have him not active in the market, I can wholeheartedly say that,” said David Zwirner, who owns a gallery that bears his name in the Chelsea section of Manhattan. “This man is a friend of mine. I called him last week — ‘How are you? What’s going on?’ I think the art world is rooting for him. I’m rooting for him. I wish he were here right now.”