Bill de Blasio has long said that he would make up his mind about whether to move to Gracie Mansion after the election, but he says he still hasn’t decided yet.

The mayor-elect told reporters today that, while the people had spoken, his family had yet to weigh in.

“Well, I’m still reticent because the family hasn’t spoken,” he told reporters at a press conference announcing the leadership of his new transition team.

Mr. de Blasio explained that he is facing particular reluctance from his teenage son, Dante de Blasio, about leaving their Park Slope home.

“As you may have noticed, there are four strong personalities in the family, one of whom–Mr. Dante de Blasio–has strong feelings about proximity to his high school,” he said. “Obviously we wanted to get through last night, not be presumptuous, but now there’s a very serious family discussion that has to be had about what makes sense going forward.”

Dante goes to school at Brooklyn Tech, about a 10-minute drive from the de  Blasios’ 11th Street row house. According to Google Maps, the school is a good 50-minute subway ride or 25 minute-car ride (in moderate traffic) from Gracie Mansion, which sits on the East River on Manhattan’s Upper East Side.

The executive mansion has been without a family since Mayor Michael Bloomberg took office 12 years ago.

Mr. Bloomberg, a billionaire who lives nearby in a much tonier section of the neighborhood, has said the city’s mayors shouldn’t live in the residence so it can be used for other things. 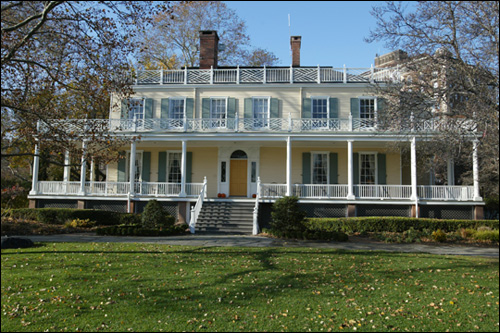