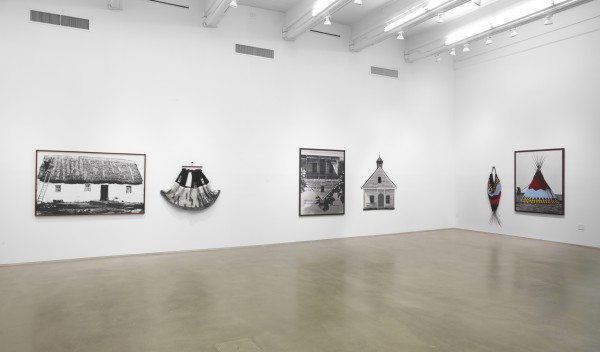 Elaine Reichek’s appropriation, in her 1994 piece Model Teepees, of 29 black-and-white photos shot at the turn of the last century, seems too easy. The images, displayed in homey wooden frames stained red and arranged in a cloud-shaped, corner-to-corner lattice, show 7-inch model teepees built by Native Americans for the ethnographer James Mooney and were taken from glass plates found in the archives of the Field Museum in Chicago. An appropriation of an appropriation of an appropriation remains an appropriation, but that’s exactly the fact that pushes this indictment past the political into the psychological and makes it unanswerable. The teepees, some striped like flags or pajamas and one, right in the middle, decorated with a gorgeous painting of a mounted skirmish, will remain defiantly fascinating whatever their frame, so there’s no way to call attention to them without also stealing the fascination.

Navaho, which pairs an almost-life-size, found, black-and-white photo of a man in headdress, mask and body paint with a knitted doppelgänger hanging on the wall beside him, is an even more backhanded subversion, setting the “woman” of “woman’s work” against the “noble savage” and leaving the viewer to sort them out. But under the stinging cognitive dissonance is a whisper of liberation, the promise of an aesthetic pleasure too hardy to be permanently damaged by the borders we draw on it or a reminder that the opposite of a false dichotomy is a singularity. The two natives of Tierra del Fuego, who stand naked in a large silver print in Blue Men, their bodies apparently painted black and white, gain or regain a royal blue color when Ms. Reichek rebirths them in wool; and the photographic teepee in Painted Blackfoot, as if to reassert that memory runs in two directions, is painted over with oil to match its knit totem in red, powder blue and yellow. (Through Dec. 21)