First, the good news: The Commons of Pensacola, a new play by movie actress Amanda Peet, is only 80 minutes long with no intermission. My kind of evening! It also stars the wonderful duo of Blythe Danner and Sarah Jessica Parker as a volatile mother-daughter pair in the middle of a life-churning crisis. Now for the bad news: It’s not much of a play at all—so unfinished, so tentative and unsure of itself, that it shouldn’t have been produced.

Ms. Peet, who has played enough dramatic scenes of conflict and passion in her career that she knows how to write them for other actors, takes a bite out of a formidable biscuit, asking the question: In an international financial scandal like the Bernie Madoff fraud, what happens to his surviving wife and children? It’s a great idea for a play, but, except for one terrific mother-daughter clash near the end that almost comes to violent blows, The Commons of Pensacola is bland and underdeveloped to the point of tedium. It is Thanksgiving, for no discernible reason, since nobody turns the oven on, and there’s no turkey in sight. Disgraced by a husband of 52 years who has been convicted of any number of unspecified securities frauds, Judith (Ms. Danner) has fled the front-page notoriety and escaped to a modest little retirement condo in Florida to escape the limelight, stripped of every vestige of her former lifestyle and forced to live in penury. A neurotic and eccentric mess who exists on an army of medications, she has thyroid trouble, heart trouble, high blood pressure, possible diabetes and such an aversion to living in severely reduced circumstances that she says, “I’m the only person in the entire state of Florida who can’t wait to get Alzheimer’s!” No wonder. Her friends, her possessions, the future she planned for her children, everything from her former life has been eviscerated. The feds are watching her like hawks, every expenditure has to be itemized, and even her two grown daughters suspect her of hiding something illegal.

Suddenly, she’s invaded by her two daughters, Becca (Sarah Jessica Parker), an actress from L.A. whose career has been broadsided by the family infamy, and Becca’s estranged sister, Ali (Ali Marsh), the pragmatic housewife who tears the flat apart looking for piles of cash their father slipped to Judith before the government closed in—money Judith claims to know nothing about. They are joined by Becca’s boyfriend, Gabe (Michael Stahl-David), who has a scheme to film a documentary series about Judith, emphasizing the shame, notoriety and public disdain (“Let people see you as a human being!”), and Ali’s daughter, Lizzy (Zoe Levin). Judith goes viral, and while she’s dispatched to the hospital for an overnight stay, her granddaughter, Lizzy, sleeps with Becca’s boyfriend, finds thousands of bills in the freezer, and Thanksgiving comes and goes with screaming instead of cranberry sauce.

Everyone heads for the airport, leaving Judith and Becca alone to seek answers to questions they’ve been avoiding. It ends with mother and daughter on a talk show for reasons as obscure as the title of the play itself. While it’s fun to watch the two leads slug it out, bravely trying to free serious subject matter from sitcom shackles, the play itself stubbornly refuses to come to life. It’s hard to believe so many contrivances can be crowded into 80 minutes of fluff. Despite the fine cast, serviceably directed by Lynne Meadow, The Commons of Pensacola finally attains a confused sensibility that befits its author’s inexperience. Without her name, it would never have been made. Ms. Danner is major. She deserves a better play. This one is a work in progress, badly in need of several more drafts. 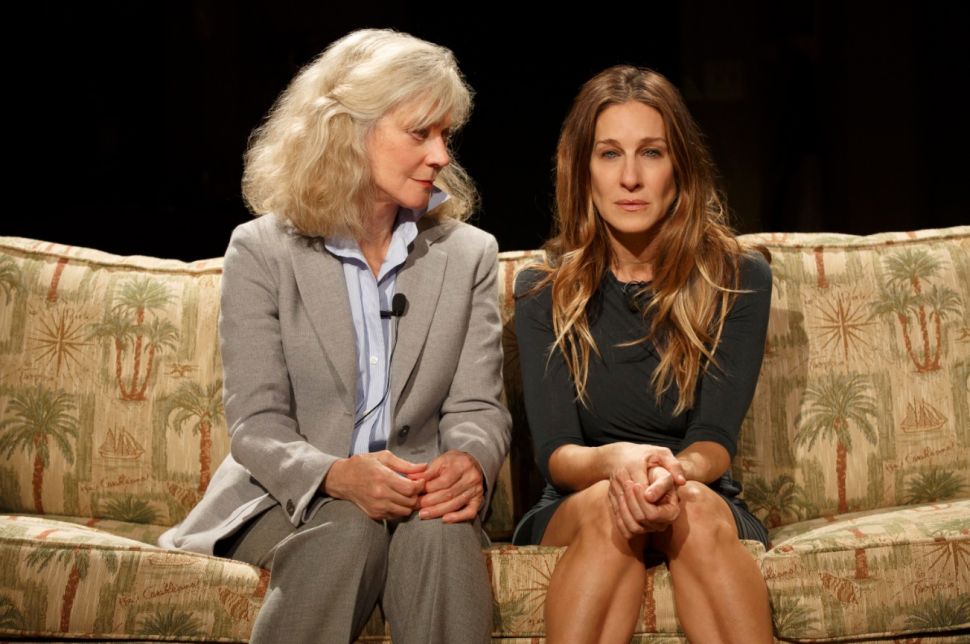