Let’s be clear. There has not been enough art involving sleepovers, and what little has been made has been woefully inaccessible to the general public. Carsten Höller’s Revolving Hotel Room at the Guggenheim in 2008 went for $259 to $799 a night, and quickly booked up. A version at the Hamburger Banhhof in 2010 (situated above pens housing a reindeer herd) went for €1,000. Reservations for an overnight stay at Walter De Maria’s Lightning Field in rural New Mexico max out in peak season, when the lightning is really going, at a comparably affordable $250, but they are pretty much impossible to get and require a lengthy trip to the town of Quemado. Rooms in Al’s Grand Hotel, Allen Rupperberg’s delightful-sounding Sunset Boulevard hotel-as-artwork rented at $15 to $30 (back in 1971, granted), but it ran for only a month. Artists like Marina Abramovic and Chris Burden, of course, have slept at galleries free of charge, but those were one-off artworks, fixated on extreme endurance and deprivation. No thank you. And Chu Yun‘s piece at the 2009 New Museum triennial, which let volunteers pop sleeping pills and pass out on a bed in a gallery sounded fun, but it was ladies only, and you couldn’t stay the night.

It was a pleasure, then, to see that Carroll Gardens’ fledgling Know More Games gallery was offering—actually, requiring—sleepovers to view its most recent show for a modest $25. It was booking visits through the popular (and recently controversial) rental-by-owner service Airbnb, which added on a $3 fee, bringing the grand total to $28. That seemed pretty good for a night in New York, even a night spent in a ground-floor space next to the Gowanus Expressway and across the street from a gas station with a Dunkin’ Donuts (which has provided the local galleries with a name for their neighborhood: the Donut District). So I booked a room.

Artists Miles Huston, Jacques Louis Vidal, and Brian Faucette run the space, and the first two live in the building, so when I stayed last week, they were kind enough to accommodate my preferred 10 p.m. check-in. Waiting for them to open the door, I peered through an opening in the blinds that partially shield the storefront windows and could see a roughly five-foot-tall sculpture of an anime-thin woman. She appeared to be made out of clay and was standing pencil-straight in front of a taller wall made from the same stuff, as if she had been carved out like a bas-relief.

Mr. Huston popped open the door, and toured me around the show, which was lit by a little desk lamp, a candle and the orange streetlights from outside. It was called “1 Bed for the Occultant”—an occultant being “blackout” in French—and had one work each from four artists. The sleepover seemed the right approach, Messrs. Huston and Vidal, who joined us, explained, because it was a show that felt like it was best experienced over a longer period of time, with a certain degree of intimacy. I’d be sleeping on a (really well inflated) air mattress next to Adam Gordon’s woman, which he made out of a special clay that never quite dries (a little creepy to consider). They gave me a beer, showed me the bathroom and quickly left.

It was peaceful in there at first, but then it slowly grew unsettling. The Expressway kept the door and windows gently shaking, and it got pretty noisy when big trucks rumbled by. As people walked along the street, the streetlights projected tall shadows against the blind-covered windows. A young man stopped right outside the door for a minute, then two, then three, lingering. What was he doing? Was some sort of performance about to occur, some art hijinks? His cellphone rang, and he picked it up, setting off toward the Dunkin’ before I could hear what he was saying. So I got used to the rumble, and looked around.

A black-and-white photo by Dru Donovan hung high above the bed. It showed a rotund man doing pretty much what I was doing: lying on his side, except that he was on the ground (not on the surprisingly comfortable mattress) and wearing briefs as he stared at his hands. A pleasantly awkward colored-pencil drawing of two handheld weights—yellow and pink—by Anne Greene Kelly hung right next to me, just the sort of weirdly conceived, domestically sized piece you would want to spend some time with. And across the way was a carefully made painting by Lui Shtini that looked almost like a digital rendering from an alien housewares catalogue. It showed a translucent green bowl holding three luminescent cylindrical objects (they looked a little like condoms or some unknown underwater creature). That one looked weirder and weirder over time, especially in the dim light. It was great.

I read for a while, watched an episode of The Wire on my iPhone, and periodically peered around the room, looking at the art and the shadows on the blinds, making sure no one was about to come barging through the door. (I recognize how psychotic this sounds, but you never know when dealing with artists or, for that matter, fairly desolate Brooklyn neighborhoods.) Blowing out the candle and turning out the light, the last thing I looked at was Mr. Gordon’s woman, still standing impassively above me.

She was also the first thing I saw when I woke up at about 6:30 a.m., when it was still dark, but time to go. The eight hours I spent in the room amounted to almost certainly the most time I have ever spent in a single show, even though I was unconscious—blacked out—for at least five of them. The rumble from the Expressway had calmed, and it was more comfortable than ever in there. It was a little sad to leave.

Back in 1977, the critic David Bourdon wrote about the dealer Jill Kornblee once following him to the elevator after he dipped rather quickly into her Midtown gallery. “Were you here to look at the show or did you just pass by?” she asked him. “Both,” he quipped. That’s the state we’re often in today, dashing from gallery to gallery, making snap judgments, trying to figure out what is worth a second or a third visit. It can be vertiginously thrilling, but as anyone who has ever hung a poster on her wall knows, art feels different when you spend real time with it, when you let it seep in slowly. 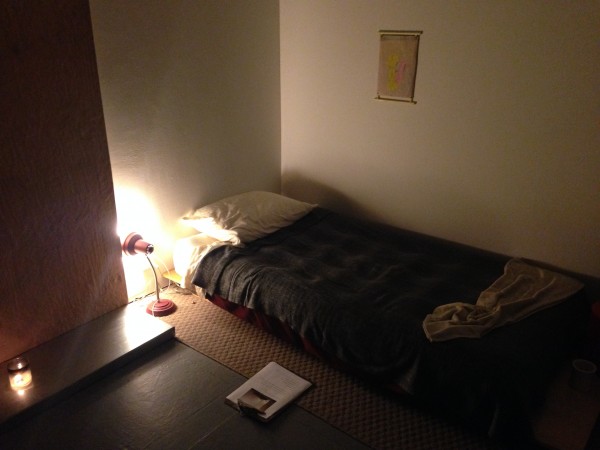