Spilling off the blackjack tables, the disdain ran deep in both camps, a sign of the stark contrasts visible early in the fledgling gubernatorial candidacies of Senate President Steve Sweeney (D-3) and Jersey City Mayor Steve Fulop.

Not at all, judging by the hair up on the backs of the necks of the people around the two men, who appear expectant of a special election Democratic Primary in 2016.

“I’m thinking [Gov. Chris] Christie leaves in 2015, prompting a special election the following year,” an insider told PolitickerNJ.com. “He’ll want to take next year to get the job done as head of the RGA [Republican Governors Association], then he’s outta here.”

Sweeney and Fulop played host to any number of party insiders in Atlantic City, then, in an apparent precursor of how this contest will develop, took their clash to the streets of Hudson County in a house-by-house showdown of Thanksgiving largesse.

Their linkages to a common heritage of generosity sink fast beneath the men’s divergences when it comes to politics.

“That guy Fulop,” a Sweeney soldier told PNJ, his voice trailing off amid AC bar throb.

Neither side believes the other has a candidate even remotely gubernatorial.

To hear them talk candidly off the record, they see Sweeny as unsophisticated, better suited to play a lumberjack on a syndicated TV series headed for cancelation sooner than actually lead the state. A union ironworker by trade without the conventional accompanying educational resume, Sweeney lacks the ability to project confidence to investors and North Jersey voters, Fulop supporters say.

Fulop’s operatives say they feel like they just defeated someone like Sweeney when they demolished local Mayor Jerry Healy.

“He’s a disaster,” said another Fulop ally, identifying himself as a “businessman,” and referring to the Senate president.

Elected mayor in May and already aggressively making the rounds as a gubernatorial contender, Fulop lacks experience, they argue, and with his Goldman Sachs past (why does that sound familiar, they rag) can hardly convincingly transmit a credible portfolio as a jobs-obsessed Democrat.

They see a “scrawny,” and yes that was the word used by a Sweeney supporter, referring to a neophyte who just made the biggest boneheaded play of his young career by trying to contrast himself with a formidable veteran in the physically imposing Senate president.

They see a callow youth who can’t remove himself from his Blackberry long enough to take command of a room the way their man can.

For their part, Fulop’s friends see South Jersey in the Gloucester County-branded Sweeney, and they could be observed shaking their heads with more mild disdain at the notion of their ambitious rival driving the length of the state up to the power blocs of Democratic Party politics: Hudson, Essex and Bergen counties, in an attempt to connect, a superficial and losing endeavor at best, in their view.

“Steve’s [Fulop’s] within striking range of all three key counties,” cackled a Fulop ally. “How can Sweeney compete with that? He’s at such a disadvantage geographically.”

An insider on a bar stool shook his head at that one. He’s not cemented to Fulop or Sweeney. He’s a North Jersey operative speaking on condition of anonymity.

“Sweeney will leverage his Senate presidency to consolidate power statewide,” the source said. “The idea that he needs to wear out his tires to build relationships is ridiculous. He has put himself in a position to capitalize on relationships with powerful people in the party who will decide things like who gets the line in a Democratic Primary.”

Insiders point to the delineations of the same Democratic Party establishment that partnered across the aisle with Christie as Sweeney’s template for power amplification, including Essex County Executive Joe DiVincenzo, state Sen. Brian P. Stack (D-33) in Essex and Hudson respectively; and other key relationships like the one he has with state Sen. Paul Sarlo (D-36), who hopes to succeed Sweeney as Senate president, and Senate Majority Leader Loretta Weinberg (D-37), both of Bergen. The same source noted that Assemblyman Vincent Prieto (D-32) – who doubles as the Hudson County Democratic Organization (HCDO) head – became the speaker-elect through a power-sharing agreement with South Jersey, which hinges on Prieto occupying a friendly throne with Sweeney.

Fulop’s people don’t deny the existence of those alliances. But they also argue that those relationships that helped protect Christie will not translate to Sweeney. In fact, one source predicted that Sweeney will find himself a victim of Christie fatigue.

“The association that Steve [Sweeney] has with Christie is too great, and Democrats won’t want to keep going with that,” the source said. “Steve [Sweeney] can’t really define himself effectively enough in opposition to Christie and that won’t serve him well in the future.”

Several sources in North Jersey told PolitickerNJ.com that party members regionally connected to considerably more Democratic votes than South Jersey feel humiliated by the organizational dominance of George Norcross III’s south and want to unify the North behind a Northern candidate to restore prestige to that part of the state where it belongs.

Fulop appears well-positioned to take advantage of those attitudes, they say.

Hearing of Sweeney partisans’ early dismissal of Fulop as a wimp, a northern operative pointed out that the Jersey City mayor served in the Marine Corps. “The guy went to Iraq in uniform after 9/11,” the source said. “To me, that’s a large part of the campaign right there.”

But even those who might sympathize with Fulop say he has jumped into gubernatorial politics too early.

“He has to govern first,” said a critic hunched over the bar in Caesar’s.

Sweeney’s allies feel very confident on this front, noting their man’s long history of executive accomplishments, going back to his tenure as director of the Gloucester County Freeholder Board, and his proven ability as Senate president to juggle the egos and agendas of an entire governing body.

His appearance this weekend in Union City showed his eagerness to capitalize on a longstanding relationship he has with Stack.

“How dare he,” fumed a South Hudson source, referencing Sweeney as the Senate president distributed turkeys in North Hudson.

Asked to explain why the source felt aggrieved by the Senate president’s presence, the source complained, “He’s politicizing Thanksgiving,” just before carefully itemizing for PNJ the turkeys dispersed by the source’s preferred candidate, Fulop.

But amid all the absurdities of a fast-emerging rivalry, what became especially clear ironically or not in the mauve and bad liver-yellow lighting of Atlantic City, was that Fulop and Sweeney both want to be governor, and for all the badmouthing, neither looks like the kind of man who will back down or make a move to avert the coming collision. 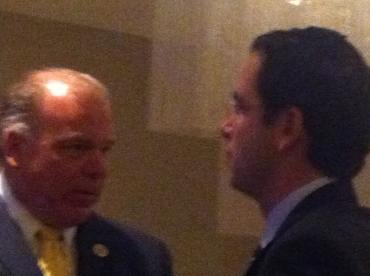