Approximately 1,000 building trades personnel spilled out of the Camden County Democratic headquarters here this morning and piled into vans in a GOTV effort that has become something of a tradition.

“This is literally a rite of passage for building trades,’’ said Sen. Donald Norcross, (D-5), Camden, amid a sea of sweatshirts bearing logos for IBEW, sheet metal workers, ironworkers, plumbers, Teamsters and more.

The union colors were occasionally interspersed with Eagles green; this is South Jersey mixed with Philly sensibilities: a straight-talking working-class commitment to preserving this region.

”You can’t buy this,” said Senate President Steve Sweeney, sporting his Ironworkers shirt and gesturing to a sea of humanity in windbreakers, jeans and scuffed workboots awaiting their marching orders as they set out to help secure re-election for Democrats and – in particular – their union-bred Third District incumbent whose seat the GOP has publicly targeted.

On a sun-splashed, brisk day, with Gov. Chris Christie’s re-election all but assured by a wide margin, according to most polls, the concern in Democratic circles is that voter apathy toward Sen. Barbara Buono will keep people home and enable Republicans to capture some Democratic spots.

“That’s what this is for,’’ Sweeney said about the blue-collar workers who soon would pile into vans, man phone banks, do whatever is asked. “This is what they don’t have,’’ Sweeney added, “working-class people willing to give up their time.”

The bricklayers, carpenters and other trades people gathered on election day 2013 know what is at stake: Southern New Jersey is poised for change with the passage in the Legislature the last two years of the higher-education reorganization that gave Rowan University a boost, the $750 million bond issue for new college classrooms that already is bearing fruit at Gloucester County College, and the Economic Opportunity Act that is designed in part to make towns in Southern Jersey eligible for tax-incentive projects that previously passed them by.

First District Congressman Rob Andrews rallied the crowd this morning by reminding them: “People used to say that New Jersey ends at Trenton.  That you step off a cliff if you go below Trenton.’’ He said South Jersey represents the beginning for New Jersey.

“One thing we have that most of New Jersey doesn’t is land,’’ Norcross said in talking about how the region is poised to really take off in the next few years.

Dan Cosner, president of the Southern New Jersey Building Trades, said that Gloucester and Camden counties combined already have 106 project labor agreements, which are designed to keep labor disputes from even starting at work sites.

“When you pass by a work site, it’s better to see people working than on the picket line,’’ Sweeney said. “We don’t want a handout.  We want a hand up.”

This was a reference to the other major element at today’s polls: Increasing the minimum wage by $1 to $8.25. 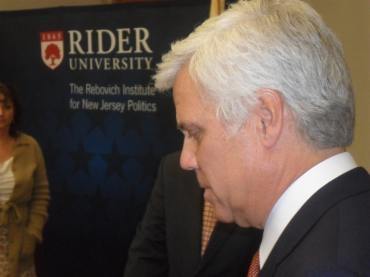