As Neal Pollack and a bunch of other less famous people know, it’s hard to be on a game show. Sure, from the comfort of your couch, without the hot glare of the studio lights or the live audience or the family members counting on you to win or the other contestants counting on you to lose or the kindly (though not so kindly this close up, now that you’re right next to him) face of the host whose been hosting this program for years now–like this is his life and its no big deal just give an answer already–it’s pretty easy to judge people for giving silly answers.

We don’t know what it’s like, for instance, to have prepared and studied for months so we could learn what the majority of 100 polled Americans would say they kept in their fridge, or find empty around the house, or do at home on a Saturday night if they can’t afford to go out. That’s just not what we spend our day thinking about, but if we had, if we had practiced and studied and put our noses to the grindstone and beat out other families with less determination to meet Steve Harvey, and we finally made it onto television only to be asked a question about zombies–goddamn zombies! Which aren’t even real, most of the time!– we’d probably freeze up and say the first person thing to come to our mind, as well.

[youtube=http://www.youtube.com/watch?v=0eLHG72iFIc&w=560&h=315]
It’s not that zombies can’t be black, or hispanic, or Asian (go for your dreams, I say). And it’s true that the first tales of zombie-ism came out of Africa and Haiti, so maybe she was on to something! Although, by her own admission, she doesn’t know much about zombies, white OR black.

On the other hand: Ah! For a question that could legitimately said to have no wrong answers–because again, zombies don’t exist, so how can 100 people even answer that question?– that was definitely the wrong answer. Worse than the “name something you put in your mouth” lady, definitely.

But is she a zombie racist? You tell us. If so, that is a new and interesting form of racism that you don’t see that often outside of American Horror Story: Coven, but then again, it takes all kinds. 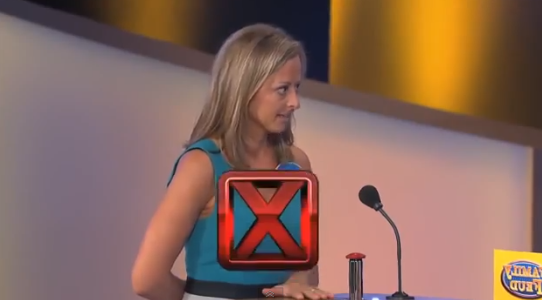