TRENTON – Senate Minority Leader Tom Kean Jr. says his caucus is united and ready to move forward despite facing opposition within his own ranks.

Kean hung on to his leadership position in the Senate minority after fending off a challenge from Sen. Kevin O’Toole. The minority leader emerged from behind closed doors Thursday with a smile, telling reporters “the vote by end [to keep him as leader] was by acclamation.”

“We had a unified caucus. The caucus stood together in strength and this focus that we had around the table is making sure that we are able to enhance the affordability of staying in New Jersey for all citizens of New Jersey and work in strong partnership with Vincent, Steve, Jon and the governor to accomplish the goals that we all hold dear for all our constituents,” Kean said following a nearly hour and a half closed door caucus meeting.

Kean wouldn’t discuss specifics of the discussion within his caucus and also declined to discuss details of his meeting with Gov. Chris Christie earlier in the day.

“I look forward to going forward with the governor on his priorities,” he responded after being asked whether Christie had a preference in the fight over minority leader.

“We had a very good conversation in the caucus here and we are united going forward,” he repeated when asked again whether Christie supported him as being minority leader.

Kean gave similar responses to questions about his relationship with the Senate’s top lawmaker.

“I look forward to it going forward,” said Kean, when asked about his relationship with Senate President Steve Sweeney, adding that he called Sweeney Wednesday to congratulate the Senate president on his win.

“We fully support him,” O’Toole said.

“Elections are over [and] Tom’s our leader,” he said. “We move ahead.” 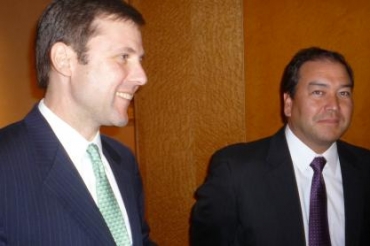