The effect, for at least one night, was a near-redefinition of Downtown feminism, as lap dances were suddenly rendered a tad more innocuous when female fashion editors and other literary types were on the receiving end.

Founding Editor in Chief Sarah Nicole Prickett said of the evening, “Berkeley and I”—Berkeley Poole is the creative director at Adult magazine and a designer at V Magazine—“thought, Why not do a party at a strip club? For us, as women, strip clubs are a place we can just relax. Everyone is looking at the strippers. You go to an art gallery, not everyone is looking at the art; they’re looking at each other. Here, everyone is mesmerized by these beautiful women doing beautiful things.”

Writers from VFiles, Harper’s, The New Inquiry, Bullett and New York magazine mingled among the baseball–capped regulars and their topless entertainers, while a wine-soaked Italian meal was served. Deejay Todd Smolar blasted Rihanna through the speakers. New York rapper Chinx Drugz sat with his Coke Boys posse, sandwiched between two blond ladies (no word on whether they’ve submitted to the slush pile). When his new single, “Feelings,” came on over the sound system, we asked what he thought of a magazine party at a strip club, to which the rapper smiled and offered simply, “Dope.” 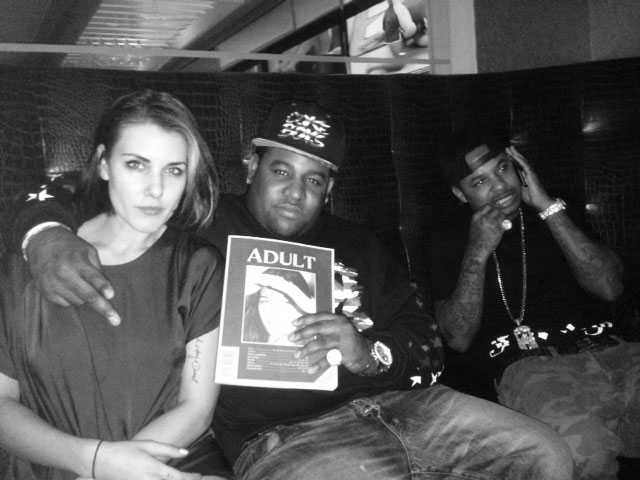