PARAMUS – New Jersey politicians on both sides of the aisle routinely complain every ten years when the state’s legislative districts are redrawn. Both parties declare that one party or the other has gained an unfair advantage when municipalities move around on the new maps. But many of those who watch Garden State political life cynically claim that these districts are gerrymandered in a way to ensure partisan stasis, boring elections and results almost frozen in amber.

But this year, in one legislative district, the resin cracked.

In LD 38, a truly competitive race produced a near statistical tie. According to machine votes and absentee ballots provided by Bergen and Passaic county election officials, the top vote-getter, Democrat Joseph Lagana, is separated by 340 votes from the last candidate, Republican Joan Fragala. Only 59 votes separate Republican Joseph Scarpa, in second place, from Democratic incumbent Assemblyman Tim Eustace, in third place. The current vote totals include machine counts and absentee ballots; a total of approximately 500 provisional ballots are scheduled to be counted on Tuesday in Bergen and on Wednesday in Passaic.

The 38th Legislative District may be Bergen-based, but the 2011 injection of Hawthorne, its sole Passaic County municipality, into LD 38 following the most recent redistricting may have made the difference this year.

Hawthorne voters sided with Fragala and Scarpa with more than 2,600 votes each, with Lagana and Eustace each receiving more than 2,100 votes. This 500-vote margin adds on to Democratic votes taken away when towns such as Cliffside Park and Fort Lee were removed from the district.

Although Democratic-trending towns such as Bergenfield were added to LD 38, the infusion of Hawthorne and the ejection of Cliffside Park alone might have been decisive, according to Bergen County’s competing party chairmen.

“Hawthorne took Joe Scarpa over the top,” said Bergen County Republican Chairman Bob Yudin. “He lost in the Bergen County towns, but in Hawthorne, he beat Eustace by over 500 votes. It’s a reasonably balanced district the way it’s drawn, and it’s one of the few competitive legislative districts in the state where either side can win.”

“If Cliffside Park is in LD 38 today, we’re not having this conversation. Democrats for the Assembly won there by two to one,” said Bergen County Democratic Chairman Lou Stellato. “Plus, the Republicans put a lot of their energy on Eustace, the only incumbent, and they were able to put him in their crosshairs and bang him around.”

Republican Gov. Chris Christie won by approximately 50,000 votes in Bergen County. Despite this Bergen blowout, Ben Dworkin, director of The Rebovich Institute for New Jersey Politics at Rider University, noted the Christie factor was just one of many in the creation of the LD 38 Assembly electoral logjam.

“Just because Republicans didn’t win in a lot of legislative districts that were competitive, that doesn’t mean that it wasn’t much closer because of the strength of the governor,” Dworkin said. “The coattails weren’t as long as long some Republicans hoped they would be.”

Any discussion of legislative district maps in New Jersey leads back to the late Rutgers Professor Alan Rosenthal (pictured), the venerable expert on state government who served as the tie-breaking member of the legislative redistricting team in 2011.

Brigid Harrison, professor of political science and law at Montclair State University, reflected on Rosenthal’s role, which has left a legacy inLD 38.

“Professor Rosenthal was a person who believed in seniority and institutional memory. He thought that the stability of the Legislature was really important in terms of its’ professionalization. But in my view, non-competitive districts bring corruption,” Harrison said. “How do you change this? You don’t, at least until 2021.” 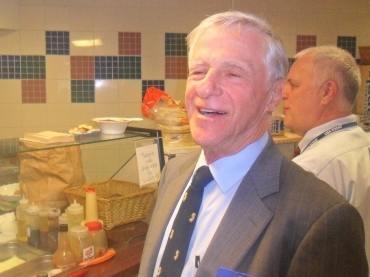