Are you as easily distracted as I am? WifeyTV posted this Miranda July bit that might help: A Handy Tip For the Easily Distracted. And I’m thinking I need to use Ms. July’s tactics on WifeyTV itself, because it is totally distracting up my Facebook feed and as a result, I’m not getting any writing or laundry or teethbrushing done. I’m also not trying to hear that there’s a little red X in the upper corner of my monitor that I could click.

WifeyTV is run by Rebecca Odes and Jill Soloway. The daily posts are short, colorful, witty, sometimes disturbing, consistently addicting. Meet a fake CGI 10-year-old who tracks down and catches online child predators! Learn a new meaning for an old word like “Ratchet!” Behold the Baby Who Cries Like a Lady when her mommy warbles that dreadful Bonnie Raitt (or Adele, and please forgive me for putting this in your head) “I Can’t Make You Love Me” sapfest! And OH! The vintage Doll House short from Sesame Street during which “two kitty cats went on a spree,” meaning that they wreck everything while the dolls (with fully operational open & close eyelids) are sleeping!

It turns out the furry perps were Jim Henson’s own real life cats and he built the doll house himself, details I didn’t care to know when I was five. My dolls dined with broken toothpicks and plastic discs pried from inside Coke bottle caps, and if I wanted them to go to sleep I had to blacken their eyeholes with magic marker and they could never wake up again.

Jill Soloway is a famous writer of books and ground-breaking TV shows including Six Feet Under and United States of Tara. I personally like Ms. Soloway most for her being a big fan of Lisa Crystal Carver. Rebecca Odes ratcheted—as the kidz apparently say—the NYC indie rock scene for years and has since become a prolific published author and blogger about family issues and the harshly hilarious realities of being a mouthy mom in modern times.

When I first met Ms. Odes she was the bass-playing singer in a band called Love Child. Love Child was a noisy, scrappy three-piece who made bratty singalong punk rock with crash-bang drums by Will Baum and oddly sophisticated experimental guitar solos from Alan Licht.

We all totally crushed on Rebecca, and not just because of that one summer night in, I want to say 1990, when they played to a packed Brownies in the East Village, and the air in the small windowless club was stifling hot, so Rebecca decided to remove her long sleeved shirt. Under it was a vintage 1950s full-form cotton bra. Not at all revealing, but the place was so dark that it seemed like that bright white undergarment was the one thing illuminating the room, and the gesture was so unexpected that the formerly boisterous crowd fell still just long enough for us all to hear Matador Records co-founder Chris Lombardi, who was sitting hunched over a corner table, break the silence with a deadpanned “Well. That is impress—” whereupon he was cut off as the band charged into a blistering take on a ferocious anthem about how she wants to SIT! With YOU! On the SOFA!

During the Love Child days, Mr. Licht was also in the avant-garde band Run On with Fish and Roses duo Rick Brown and Sue Garner. He made a solo record titled Calvin Johnson Has Ruined Rock For An Entire Generation which was obviously a joke because Beat Happening were awesome and what generation would that be anyway? Robert Christgau once dismissed Licht as an “arty dilettante,” but whatever, Christgau was a notorious grump.

I’m a little embarrassed to admit that my clearest memory of Alan involves a frost-bitten winter morning in Hoboken when I was walking my dog. Maybe we talked about how Homestead Records was putting out a Love Child album, but I don’t remember because I was distracted that my nose might be running, since it was the kind of wet windy cold where that kind of thing can happen and you just won’t feel it, and then I looked at him and his nose was running, so I felt an absurd kind of solidarity. Recently, Licht wrote a lovely remembrance of the times he met Lou Reed and the two of them played “Invisible Jukebox.” And that’s all I’m gonna say about Lou Reed dying, except that “Street Hassle” is one of my favorite things. 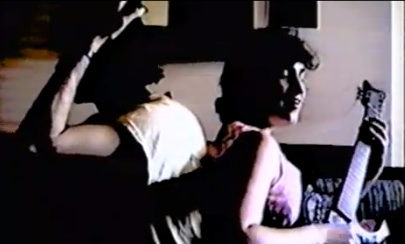