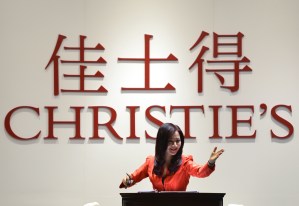 Still thinking about the Christie’s contemporary evening sale? This Bloomberg Businessweek story quotes Don Thompson, author of The $12 Million Stuffed Shark: The Curious Economics of Contemporary Art as having a creative theory as to why Francis Bacon’s Three Studies of Lucian Freud by Francis Bacon (1969) was moved, just before the sale, from lot 32 to lot 8A: “Apparently they had a Chinese bidder who was very interested, but he’d only bid if it was item No. 8, because 8 is a lucky number.”

There was a certain logic to moving it up, in that everyone who missed out on the Bacon lot could then bid on the lots that came after it. Still, it’s a fun theory! Doesn’t really explain the A, though, which is strange. Also, that’s technically 9. Why not just make the Bacon lot 8, and move everything else down?

As you well know, it eventually sold for $142.4 million, which is a somewhat Chinese-sounding figure, though it may or may not be especially lucky. Resale at that price might be tricky.