If your disbelief is particularly difficult to suspend, one night at Kaiju Big Battel will probably clear that up. A mix of performance art and professional wrestling, the monster scraps are so surreal that by the end of the evening it is only natural for a giant, arrogant waffle to demand raucous applause.

Earlier this month, a swarm of homemade (yet surprisingly resilient) heroes and villains visited New York City’s Stage 48, where they put on their latest show Japandemonium. Essentially, a Kaiju Big Battel event pits professional wrestlers wearing monster costumes (the kaijus) against one another for control of a tiny cardboard city. But it’s so much more than that.

“As soon as you walk in, you know you’re getting something wacky,” Louden Noxious, the evening’s emcee told The Observer. “But shit gets real, people get invested, and by the end you find yourself rooting for the heroes.”

Indeed, it was hard not to get into the action. When Los Plantanos, two banana-like creatures that had wooed the crowd, lost their match—we felt the disappointment. And when one of them got angry at the other for getting pinned, he crossed his arms and kicked at the bottom rope like a frustrated child refusing to apologize and we, too, chanted “Hug it out!”

Noxious, who’s been with Studio Kaiju, the Boston-based performance group responsible for Kaiju Big Battel, for 13 years, acts more like a narrator than a traditional ring announcer. The ring is a stage—any athletic competition is purely accidental. The matches weave (mostly) seamlessly into one another, allowing for the curtain to rise and fall with the tempo of Broadway entertainment.

Looming in the background, of course, was the Internet—a series of tubes constructed of Google-colored foam pool noodles. “We did not skimp,” said Noxious, “we got all of the Internets.”

Many of the heroes won, but just as many lost. Dr. Cube (a guy with a cube for a head) continued to swap his monsters’ heads. A huge dust bunny appeared to save the day, as did the aptly-named Steam-Powered Tentacle Boulder. The viking Slo Feng recovered his Kaiju Championship, which allows kaijus to perform at “100 percent of their power 46 percent of the time, with 20 percent humidity.”

By the end of the show, Kaiju Big Battel had more than lived up to its tagline: “Monsters are real. Danger can happen.” And then some.

Leaving the strobe lights and chiptunes for the cold, damp streets of West 48th Street, past the Broadway shows and the tourists, the real world felt awfully dull. 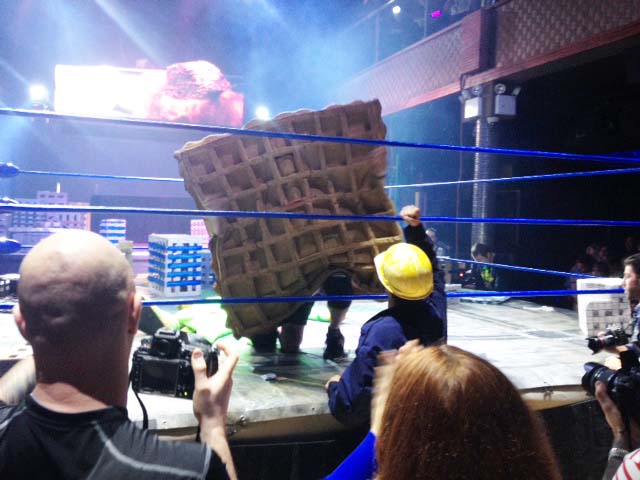