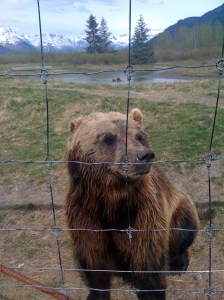 Museums may not be able to reclaim their works from that recently discovered trove of Nazi-confiscated art because the law that let the Nazis take the art in the first place is still on the books. Many want to overturn the law, though that may not lead to an expeditious resolution. This is a mess, to say the least. [NYT]

“‘Every time we see some sort of excess in the marketplace Sotheby’s’ stock moves from about $10 to $50, then ‘collapses.'” [Reuters via Art Market Monitor]

“Oil heir Brandon ‘Greasy Bear’ Davis got into a clash with a fellow partygoer at the lavish opening for the Museo Jumex in Mexico City.” [Page Six]

Here are some photos of “the end of 5Pointz.” [NYT]

On David Hockney and his love for the iPad. [Wired]

A studio visit with the excellent Jamian Juliano-Villani. [Sex Life]

The video for Kanye West’s “Bound 2” video: people are talking about it.