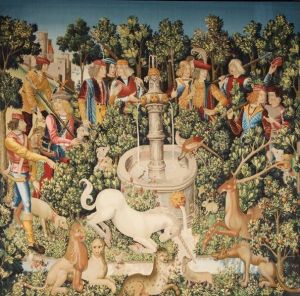 ‘The Unicorn Is Found’ from the seven-part tapestry ‘The Hunt of the Unicorn,’ ca. 1495–1505. (Courtesy the Cloisters/Wikimedia)

The Museum of Applied Arts in Vienna has reached a settlement with former director Peter Noever, who was ousted in 2011 after being accused of using museum funds for lavish private parties and travel. [The Art Newspaper]

One expert pegs the global rate of “recovery and successful prosecution in cases of art theft” at just 1.5 percent. The rate is 30 percent in Italy. [The Art Newspaper]

Citing a financial crisis for its museums, Sicily will no longer allow 23 of its most important artworks to travel abroad. [NYT]

“Another Look at the Loom: Tapestry Art Makes Comeback in Paris” [NYT]

London’s Victoria & Albert Museum just put on view a Constable oil sketch that it found hidden beneath the canvas lining of another work. [The Telegraph]

Detroit creditors have requested that the bankruptcy court create a group of independent experts to value the Detroit Institute of Arts collection. In other news, the Christie’s valuation is supposed to be done by December. [WSJ]