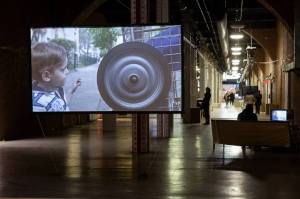 Moving Image, the annual video art fair, will team up with Eyebeam, the Chelsea-based art and technology nonprofit, for its fourth New York edition next March. The two collaborated at the London iteration of the fair last month, where they presented “AV Bar,” a kind of by-appointment resource for folks looking to learn more about collecting and presenting moving image works. “The AV Bar was also developed to help make collecting film and video art more enjoyable,” according to the news release. An expanded version of the bar will appear at the fair, which will be held from March 6 to 9 in the Waterfront Tunnel event space on Eleventh Avenue between 27th and 28th Streets. Additionally, Moving Image and Eyebeam will stage a joint exhibition near the latter’s 21st Street headquarters. The show will feature artists who have completed residencies at Eyebeam along with “a new Augmented Reality performance” by Claudia Hart, an honorary fellow.