Talk of a merger between Gawker and Business Insider, helped along by Nick Denton and Henry Blodget, was the subject of frenzied speculation last week.

Media observers were all a-Twitter over a rumor that Messrs. Denton and Blodget were planning to announce a merger between their companies when they took the stage at a scheduled panel during a Business Insider-sponsored conference.

While no such deal has been announced, the two moguls seemed to enjoy fanning speculation.

The chatter began after the two men had breakfast at Balthazar on Nov. 1—a breakfast that became famous when Mr. Blodget wrote a rant on Business Insider about the annoyance of bathroom attendants (and, as a result, Balthazar owner Keith McNally pledged to reassign said attendants).

Following the breakfast, both Capital and The New York Post ran items on a talk of a merger between the companies.

The buzz reached a crescendo on Wednesday when Business Insider writer Jay Yarow tweeted that there would be a merger announcement later that afternoon.

“Rumor is that at 2:30 PM, @hblodget and @nicknotned will lay out their plan for the Gawker-Business Insider merger at #ignition2013,” Mr. Yarrow wrote.

A good way to ensure that one’s boss’s panel discussion is well attended, perhaps. But before the auditorium at the Time Warner Center filled up with excited media watchers, Mr. Denton splashed cold water on the speculation in an email to OTR.

“We had breakfast, as we regularly do. I admire Henry Blodget, Joe Weisenthal and Business Insider’s editorial management. They’d have more fun with us than at AOL, where they’d be yet another unhappy unit. And they’re having fun with the possibility alone,” Mr. Denton told Off the Record, after denying that there was anything to the rumors.

Although Mr. Blodget hasn’t addressed speculation of an AOL/Business Insider marriage, Mr. Denton has continued to bring it up.

At the panel, the two men obliquely addressed the rumors in a convoluted conversation during which they vaguely criticized each other’s content and Mr. Denton hinted again hinted about AOL and Business Insider.

The next day, Mr. Blodget added more fuel to the merger talk.

“The rumors that we would talk about the plan were true! And it’s an exciting plan! I would just need to persuade Nick to let me convince some of his Gawker writers to be less instinctively grouchy,” Mr. Blodget said, in an email to OTR.

We directed Mr. Blodget to Mr. Denton’s denial of said plan. “Yes! As I said in the note, I would apparently have to persuade Nick, too,” Mr. Blodget clarified.

But according to Mr. Denton, it is more of a case of media speculation, although it seemed that Messrs. Denton and Blodget were having some fun stoking the rumors.

“We’d discussed the fit at breakfast,” Mr. Denton told OTR this week. “And then Vox bought Curbed, and all of you got excited about other possible combinations.”

And it was an exciting. At least for a few hours. 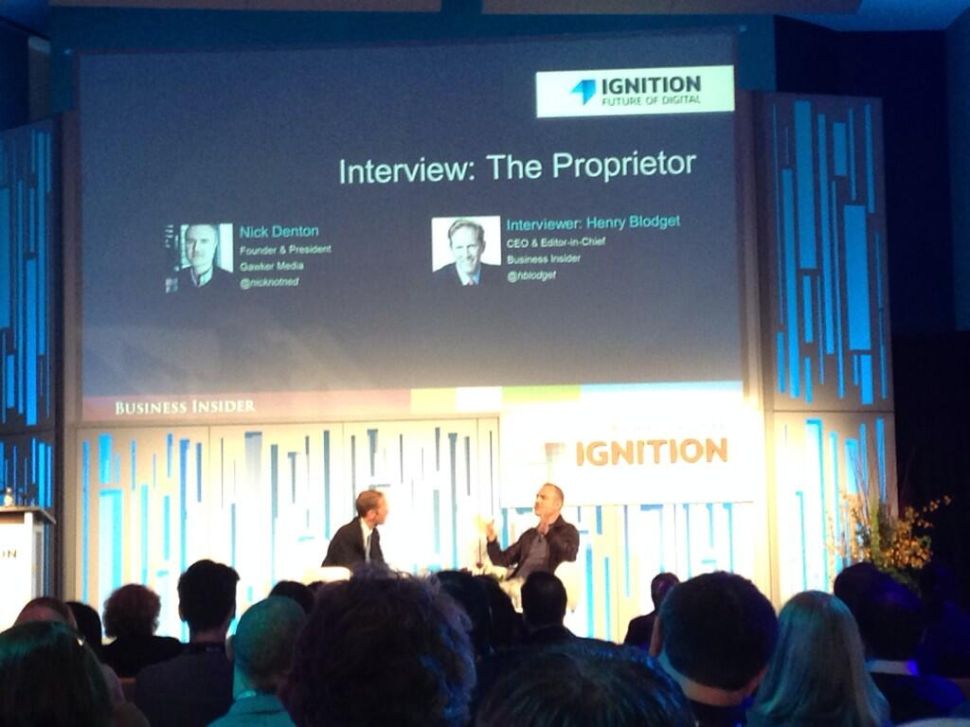