Beauty brand Burt’s Bees is normally associated with crunchy moms and eco-teens. But after a New York-based group complained that a recent product slogan made light of—and even straight up encouraged—street harassment, the company has been forced to abandon its latest lotion packaging.

Güd, a sub-brand of Burt’s Bees, recently released its new Vanilla Flame Body Butter (that’s branding-speak for “expensive lotion”). The tagline for the product was “Soak in the moisturizing seductiveness of shea butter and indulge in the scent of vanilla and rice milk. And let the catcalling commence.” The company also included the cringeworthy “A sexy moisturizer that leaves you feeling sexy and moisturized” on the product packaging, which makes it clear that the brand could benefit from a copy team with a newer-model thesaurus.

The catcalling-friendly slogan left room for Hollaback, an anti-street harassment group with chapters in 64 cities in 22 countries, to step in. According to Hollaback, a Güd customer named Colleen Kiphart was upset by the slogan and reached out to Hollaback. Though they were able to wring a pseudo apology out of Güd (“We apologize if the wording on our Vanilla Flame Body Butter packaging offended anyone”), that wasn’t good enough. Hollaback created a Change.org petition demanding that Burt’s Bees a) “issue a real apology,” b) “agree to stop production of products that legitimize street harassment,” and c) “make a donation to Hollaback!”

Wait, is this a social protest or an extortion attempt?

Clearly, Burt’s Bees heard the message. They posted a longer apology on the Güd Facebook page, writing “Our products are designed to make women feel good on the inside and out. We want women everywhere to be able to enjoy amazing smelling natural personal care products that will leave them smiling, not attracting undesirable and disrespectful attention.” They promised to sell only the remaining existing stock of the product and not create any more. While the body butter is no longer available on Güd’s website, the customers who apparently wandered into the apology thread to ask where they could buy the stuff will have to try their luck on Dermstore.com.

The comments on the Facebook post—which do not appear to have been moderated—range from “Who cares?” to “I don’t accept this” and feature a cameo from ratio-changing feminist Rachel Sklar, who called the response “not NEARLY enough.” Another commenter, who evidently has never heard of internalized misogyny, chastised the company—and other companies who have issued apologies to consumers—for behaving like “little girls.”

UPDATE: Following our gentle joshing here at The Observer, Hollaback has updated their Change.org petition to remove the item about Güd making a donation to their organization. They also reached their 1,000-signature goal. So far, Güd’s spokesgirl Carly Rae Jepsen has not weighed in on what it’s like when all the other boys try to chaaaaase her. 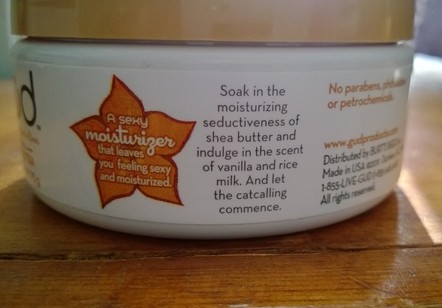 Filed Under: That Stings