A movie star owns much of Tribeca, and many movie stars live there in tastefully decorated lofts of immense grandeur and capaciousness. They live alongside successful artists who bought early and financiers who arrived late. Aesthetically, it’s a well-off neighborhood. Financially, it’s in even better shape: 10013 is the most expensive zip code in Manhattan. Poodles poop opal piles on platinum sidewalks. Mothers speak Locust Valley lockjaw, while their toddler sons and daughters, a cute platoon of Polarn O. Pyret-clad Rowans and Stellas, learn to suck teeth and speak Bajan. The neighborhood does not want for public spectacle.

This has been true ever since the overflow crowds spilled from Area at 157 Hudson and Jay McInerney flailed like a gunpowder marionette through Odeon. Although the club closed in 1987 and Mr. McInerney is now a dummy wine columnist, the taste for spectacle endures.

And now the curtain opens on American Cut, the new steakhouse by Marc “Forge” Forgione.

On a crisp quiet night in late October, two men smoke stogies on the patio in front of American Cut. Backlit by floodlights, they might be in their 30s, though it’s hard to see through their smoke halos. They are laughing madly, like wolves over a carcass. They smell like power—cologne, smoke, whiskey. They move aside, and I push by, alone, walking quickly.

The double doors to the restaurant swing open in unison, or at least they should. (American Cut is not the kind of place one should enter through just one door.) We dolly into the restaurant, onto a swaggering Mad Men fantasy. A sonic rush: It’s loud in every way. All the surfaces are hard and burnished. The zebrawood tables, the inlaid marble floors, the glass shelves with glass bottles, the big watches, swinging dicks, hard smiles, hard eyes, a $20 “plank smoked” old-fashioned made with Woodford Reserve served in a maple wood-smoked glass on a hardwood bar. Big ice cube. Amber liquid. Hot-boxed luxury. It’s brash and Art Deco, but the effect is Max Beckmann.

At American Cut, the tables are so large, the leather seats so deep and the din so loud diners contort their faces into masks of tragedy and comedy to get their points across with a conspicuous lack of subtlety. Perhaps they’d do the same in closer, quieter quarters, but here they have cover. No great steakhouse is subtle. Steakhouses are the silent movie stars of restaurants. Their gestures are grand and pantomimed. It is awesome to behold a restaurant in such lockstep with its patrons. It’s actually kinda beautiful.

Even the slightest suggestion of nuance has been gutted. The menu is a succinct study of too much. Its divisions are unsurprising: raw, classic and hot appetizers and then a page of meat. Mr. Forgione has correctly surmised that surprise has no place here. One doesn’t go to a steakhouse to be jolted but to be validated. The best a steakhouse can do, and this American Cut does, is to perfect the small canon of classics. By perfect, I suppose I mean both properly execute and make even more extravagantly bananas.

Take the Diamond Jim Brady oysters ($18). Oysters, the only yonic food in this phallic temple, are a steakhouse staple. American Cut’s are named after the glutton robber baron Big Jim from Blood on the Tracks. DJB ate his oysters baked, as was the custom at the time, with crucolo, a soft cheese from Trentino, and Champagne, a sparkling wine from Champagne. For his version, Mr. Forgione covers six Olde Salt oysters in a black truffle bechamel sauce made with the cheese, adds a splash of Champagne and bakes them.

Diamond Jim, with a stomach six times the size of a normal man’s, ate his oysters this way, because he alone could. Whether you wish to or not depends on whether you enjoy how oysters taste. If you do, don’t. But if you like the idea of oysters, but really secretly don’t like the taste, do. The flavor of the little bivalves is moot and muted. Their shells are just shovels, each bearing a cheesy, creamy payload.

The pattern is repeated, and, if a fault can be found at American Cut, it is this: the utter and aggressive disregard for the natural flavor and character of ingredients. This seems deeply at odds with current culinary trends. The oysters taste like cheese. The shrimp in the cocktail, chilled and stuffed into a neat little silver goblet, are so overwhelmed in Mr. Forgione’s signature 22-Batch cocktail sauce that they too are demoted from being crustaceans with tiny shrimp souls to being rote messengers for horseradish. The chili lobster, a Forgione staple and luxe take on the Malaysian chili crab, looks like it has lobster in it—and it does indeed contain an entire lobster—but the spicy broth totally overpowers the meat. Still, the dish is delicious, especially when chased with a thick buttery slab of Texas toast, which doubles as a sponge.

Even I can see what lunacy it is to critique a king for ruling by fiat or a steakhouse for its aggression. American Cut is not the place for active listening and deliberative democracy. It’s opéra bouffe. It’s opéra beouf. It’s a show, and Marc Forgione is a master of the genre.

He opened the original American Cut at the Atlantic City casino Revel. Restaurants at casinos are meant to provide succor to suckers or to court big whales. Either way, it takes a show to distract them from their losses. Here, in Tribeca, the room is full of winners, but Mr. Forgione still unerringly manhandles his meat to maximum effect.

Take, for instance, his NYC Cut ($44), 20 ounces of Creekstone steak, brined, coated in pastrami spice, grilled and topped with caraway seed butter. The result is a half-steak, half-pastrami beast you half expect a surly Katz employee to come in and claim. It’s a lot. Too much, in fact. But it’s perfect. A lesser chef might have felt compunction to treat a former cow this way, but Mr. Forgione forges forward headlong. Crazy as it seems, it all works out. Of abnormal juiciness, extreme tenderness and superb flavor, the NYC Cut is one of the best steaks I’ve ever eaten.

I’d be slightly less enthusiastic about the restaurant if this was the extent of Mr. Forgione’s talent, but, when he wants to, he can also scale back. A 14-ounce dry-aged New York strip ($42) is served nearly au natural. Mopped with dry-aged fat and crusted, it’s the product of great facility at the grill station. Of course, for those to whom this seems too ascetic, the steak—like all the steaks on the menu—can be doused in one of six sauces and topped with an increasingly insane array of condiments, which start at an egg ($3), cycles through bone marrow ($8) and foie gras ($18) and chili lobster ($27) and ends with shaved white truffle ($99).

I don’t think adding any of these materially improves the steak, and I wager neither does Mr. Forgione, but he knows his powerful patrons like to make up their own minds.

Mr. Forgione’s most brilliant gesture at American Cut isn’t the meat at all but a single carrot. The carrot, technically the “carrot glazed carrot,” is but one long carrot, covered in honey mint carrot reduction. It arrives on a single plate like a giant orange priapus and costs $10. It must be an insult, but if it’s a “fuck you,” the diners don’t seem to mind getting rogered. In fact, they rather enjoy it.

Perhaps it’s animist or what Keynes called “animal spirits” that draws them to the orange pego. The Tupi tribe of Brazil, after all, used to eat their vanquished foes in the belief they would gain their strength. If this is true, a 9-inch $10 carrot-cock is nothing if not bargain-basement manhood. If it’s a sly commentary on his patrons’ need to constantly reinforce their masculinity through reckless consumption, it’s a brilliant joke. But if it’s just a carrot, it’s one terrific carrot, and that’s enough. 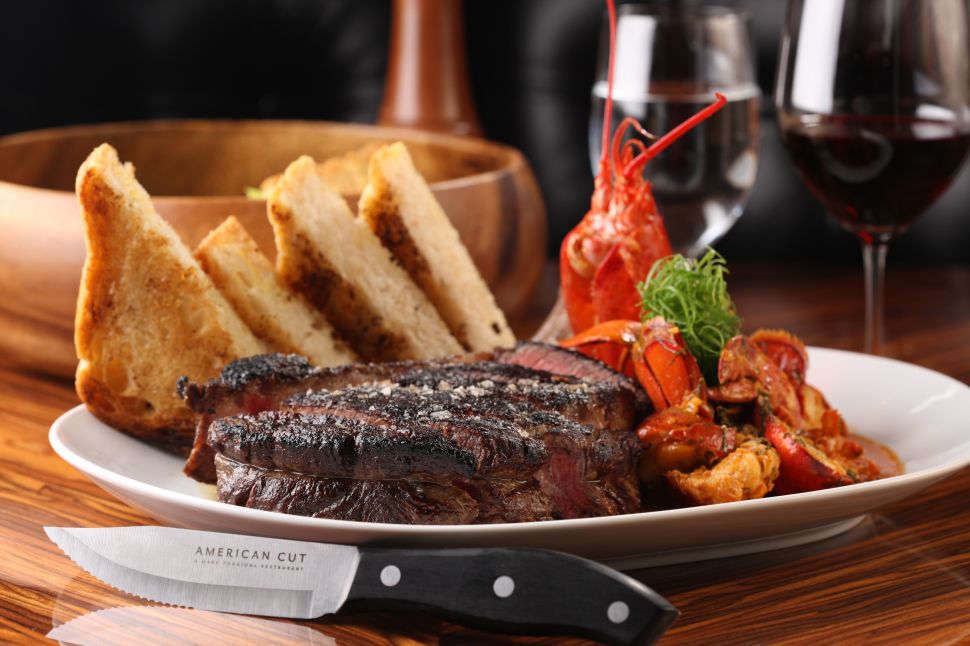