Last Tuesday night, as the Museum of Modern Art’s glitzy annual film benefit was starting up on 53rd Street, British artist Isaac Julien was in Chelsea, dressed to the nines, pacing the floor of Metro Pictures gallery. The benefit was in honor of his longtime friend and artistic collaborator Tilda Swinton, but he wasn’t ready to leave—last-minute edits to his exhibition kept him striding everywhere but the door.

“Playtime,” the first exhibition of his films in New York in six years, was opening there in a couple of days. The show’s titular piece, an arresting 70-minute video shot in London, Iceland and Dubai, sumptuously fills a 30-foot  screen. In another video, Kapital (2013), Mr. Julien and author David Harvey discuss Marxist theory and contemporary economics with a host of writers and curators. Install was complete, but Mr. Julien kept stalking up to the video works and photographs, his Matrix-ready ankle-length wool coat billowing behind him.

“Why’s it doing that?” Mr. Julien asked one of two tired-looking technicians who had flown with him from London. A menu had popped up on one of the screens, blocking part of the video. Tech talk ensued, ending with Mr. Julien charging back into another room to scrutinize its contents.

Is he a perfectionist? The A.V. guys, who have a long history of installing these videos, nodded gravely. The next day, they were heading to MoMA to install the nine-screen Ten Thousand Waves (2010), Mr. Julien’s most ambitious project to date, which opens in the museum’s atrium on Nov. 25. “Yes,” said one. “And then some.”

Mr. Julien’s films, sweeping, cinematic works that address issues like diaspora and displacement through jaw-dropping visuals, are relentlessly beautiful: perfectly composed and rich with dazzling color, sets and sound. In Playtime (2013), attractive actors deliver their lines, first-person monologues relating to the financial crash, or silently wander over golden sand dunes and lunar Icelandic landscapes. This aesthetic splendor is what draws some of Mr. Julien’s sharpest criticism. “As an artist, he is a great seducer who wants his works to be as visually rich and conceptually dense as possible,” critic Adrian Searle once wrote in The Guardian. “Giving the work more narrative space and air and perhaps less physical, optical breadth may be the best move forward.” 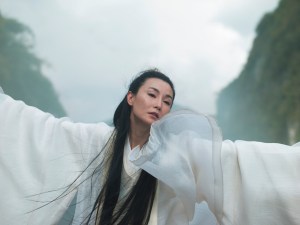 A still from ‘Ten Thousand Waves,’ 2010. (Courtesy the artist/Metro Pictures)

Mr. Julien said he is often asked, “How can you make a beautiful work out of such ugly subject matter?” The lush Ten Thousand Waves, for instance, filmed in rural and urban China, was partly inspired by the 2004 Morecambe Bay tragedy, in which 23 Chinese cockle-pickers were drowned in northwest England. “I think there’s a way in which how these things get viewed is a problem,” he said, “one I’m trying to, in a way, challenge.”

“There is this kind of assumption that, if you’re dealing with difficult subject matter, that has to be reflected in the look,” said Mr. Julien’s partner, the curator Mark Nash, who cited art historical precedents for marrying hard-hitting content to aesthetic appeal, like Théodore Géricault’s The Raft of the Medusa (1818-19). Mr. Nash co-curated Documenta 11 in Kassel, Germany, in which he included Mr. Julien’s Paradise Omeros (2002), a meditation on Creole identity. (Mr. Julien’s parents emigrated from St. Lucia, and several of his films deal with global migration.)

In Playtime, beauty may not be what polarizes people. Of the five main characters, James Franco plays the most conspicuous: a repellant, wealth-obsessed art dealer/adviser, who talks into the camera about the excesses of the art market. “It’s a game!” he announces, arms stretched wide, as the camera whirls around Victoria Miro Gallery, Mr. Julien’s London representative.

“I know there’s a James Franco roast and there’s all of that Hollywood aspect, but in person he is quite serious and he is very smart,” said Mr. Julien. “He’s really, really, really clever.”

But Mr. Franco’s is a somewhat heavy-handed segment in an otherwise nuanced and affecting exploration of the financial crash. The other characters (all five are based on real people whom Mr. Julien researched and interviewed extensively) include an Icelandic photographer whose home became a modern ruin when he lost everything and a Filipina woman who worked as a maid in Dubai.

“I wanted to do something about capital that was emotional,” Mr. Julien said, as the actress onscreen stared out a skyscraper window, choking back tears. “Because you have all these theories but not empathy.” 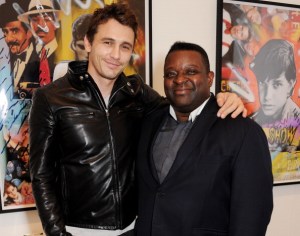 Messrs. Julien and Nash arrived at MoMA just as Anna Wintour’s bob disappeared through the door, and they made a mad dash for the balcony just off the atrium, where they could observe the spectacle of the scrum below. A phalanx of fashion assistants from Vogue stood around the lobby like sentinels. The Chanel posse, led by Karl Lagerfeld, arrived in black leather. Bee Shaffer posed for the flashing cameras. “What dress is she wearing?” purred Mr. Julien slowly, drawing out vowels like taffy. “Isn’t that horrible?” Maybe it was the dry British delivery or the fact that Mr. Julien tends to be warm and self-effacing, but his commentary made him sound less catty than like a perplexed visitor from some other, far-more-elegant planet than our own.

The party brought gin-and-tonics and old friends like critic and scholar B. Ruby Rich, who, years ago, introduced Mr. Julien to some of his favorite collaborators: Maggie Cheung, the Chinese actress-artist who plays a storm goddess in Ten Thousand Waves, floating above oceans and cities in flapping white robes, and Ms. Swinton, the night’s honoree, who has known Mr. Julien for more than 20 years. They worked together on Derek (2008), a documentary about their mutual friend, the late filmmaker Derek Jarman.

“I remember noticing even then the magic combo of Isaac’s sweetness combined with his gimlet twinkling eye, always on the lookout for mischief and the whiff of any vaguely anarchic possibility,” Ms. Swinton later wrote in an email. “His piece Ten Thousand Waves is one of the most beautiful installations I know of: grand and tender with a precise inner core of sharpness. Grand, sharp tenderness, then, is what I would nominate as the Isaac Effect.”

Ms. Swinton had flown home to Scotland by the time Mr. Julien’s show at Metro Pictures opened last Thursday, but the reception was full of friends like Studio Museum in Harlem director Thelma Golden and artists Glenn Ligon, Peter Doig, Louise Lawler and B. Wurtz. Visitors struggled to squeeze into the back room housing Playtime, where dozens of viewers sat on the carpeted floor, paying more attention than video art usually gets at openings.

Mr. Julien peered contentedly into the gallery. “People get a little transfixed,” he said, “don’t they?” 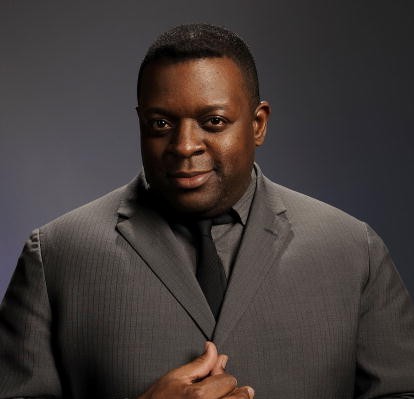