The head of the Latino Leadership Alliance says he’s confident Gov. Chris Christie will support the New Jersey Dream Act despite a public spat between the governor and legislative leaders on the bill’s details.

Martin Perez says the issue “is too important” to get snarled up in a political battle between Democrats and the Republican governor. He and other Latino officials will continue to push for the bill’s passage during the lame duck session, he said.

“It is time that we put politics aside and we pass a bill,” Perez told PolitickerNJ.

Perez’s comments come on the heels of Christie announcing on 101.5 FM’s monthly call-in show that he would not support the state Senate’s Dream Act in its current form.

The statement prompted Sweeney to issue a harsh release that blasted the governor for reneging on a campaign promise.

“When he was running for governor he supported it and now that he is running for president, he does not,” Sweeney said in a statement. “The governor never misses an opportunity to disappoint.”

However, Perez, who was appointed by Christie to the Rutgers University’s Board of Governors and endorsed his gubernatorial re-election bid, urged both sides to come together and agree on a final proposal.

“This is a commitment that both parties made,” he said.

Perez, who didn’t give specific details of a bill that he would like to see pass both chambers and be signed by the governor, said he doesn’t doubt Christie’s commitment.

“He is truly committed to in-state tuition,” he said. “I don’t doubt it.”

Prior to the November election, Christie indicated he supported the Dream Act, but didn’t give details of what he would accept as a final product.

Currently, the Senate and Assembly have two different bills.

The Senate version has provisions for both in-state tuition and financial aid. The Assembly version lacks a financial aid provision, however, Democratic officials indicated in recent weeks they planned to reconcile the lower chamber’s version to match the Senate proposal. 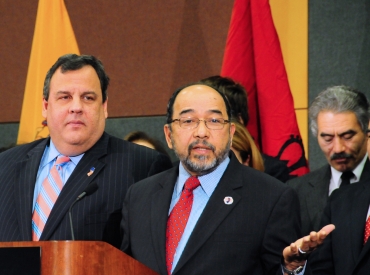