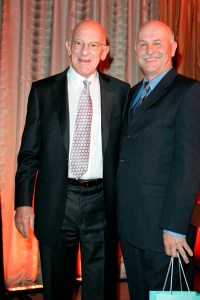 Peter B. Lewis, the philanthropic former chairman and chief executive of Progressive Corporation, died yesterday at home in Coconut Grove, Fla. Lewis was known for his gifts to places like Princeton University and Democratic campaigns, along with ones to legalize marijuana. The art world, however, will probably best remember his contentious relationship with the Solomon R. Guggenheim Museum.

Lewis joined the Guggenheim’s board of trustees in 1993. He famously gave $50 million to the museum in 1998, the largest cash gift it has ever received. The money went to restoring the theater that now bears his name beneath the Frank Lloyd Wright rotunda, and to the endowment.

He bailed the museum out of various financial disasters, and by the end of his term he’d given about them about $77 million, nearly four times as much as any other board member in Guggenheim history. Lewis clashed with controversial director Thomas Krens over expansion abroad, though, opposing satellite locations in cities like Berlin, Bilbao and Abu Dhabi. Lewis also openly criticized the Mr. Krens for dipping into the endowment to cover operating costs. Lewis finally resigned on Jan. 19, 2005, following a me-or-him showdown at a three-hour board meeting.

Lewis and Mr. Krens, who stepped down in 2008, weren’t always enemies. The two were introduced in the early 1990s when Lewis was working on a “dream home” with architect Frank Gehry, who designed the Guggenheim’s branch in Bilbao. “Frank wanted me to meet Tom because he thought we were kindred spirits,” Lewis once told The New York Times. “And that’s how it all started.”