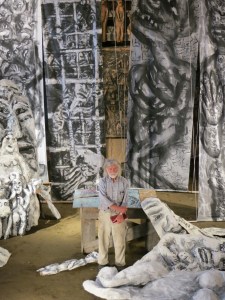 Peter Schumann in his studio.

Peter Schumann means what he says. Shortly after moving from Germany to New York in the early 1960s, he began staging performances with a group of other forward thinkers. He would bake a tough sourdough bread to give out to the audiences that gathered every week in a Delancey Street loft. When he and his wife, Elka, decided, in 1963, to name what turned out to be a 50-year-long campaign of papier-mâché puppets built on a consistently precarious subsistence budget and wielded with the messianic protest vocabulary of a medieval peasant rebellion, they found a way both to one-up the I.W.W.’s early-20th-century demand for “bread and roses” and reclaim the phrase that the satirist Juvenal famously used to indict the Roman welfare state: “bread and circuses.” They called their work the Bread and Puppet Theater.

Since 1970, the theater has been based in Vermont’s Northeast Kingdom, but Mr. Schumann recently spent several weeks in Flushing Meadows installing his first solo museum show at the newly renovated Queens Museum. In a town-hall-style atrium with powder-blue walls and glass doors looking onto the 1964 World’s Fair Unisphere, Mr. Schumann spent four frantic hours on an electric lift, respectfully observed by construction workers, using a brush attached to a mop handle to paint an enormous, soot-black and ash-gray mural on the curving white wall at the front of the room.

Directly behind a retro-futuristic white staircase with glass steps, Mr. Schumann has painted a blocky, ingrown, tumbledown city of translucent gray towers. Some of them are pockmarked with maggoty windows, some are overlapped and melting; all of them are equally legible as tombstones, coffins, ingots or prison cells. But behind this hideous city, in the same deathly tones, an enormous naked man sprawls across the length of the wall, his spine a fishy black ridge, his head little more than a skull with chasms for eyes and a gasping, tooth-lined hole for a mouth, stretching out his arms like a football player diving for a touchdown as he waves a flag charged with the image of a single boot.

He’s protesting war and greed—Bread and Puppet began demonstrating against American intervention in Southeast Asia as early as 1964, and I bought a print of a revolver shooting the onomatopoetic word “BANK!” at a “Bread and Puppet” show last year, but the pure intensity of his gesture is more essentially a protest against the very medium it’s bound in. It’s life against death, the rose’s defiance of the transience of bread.

For the length of the exhibition, one of the skylighted courts to either side of the atrium has been renamed the Shatterhouse and filled with figures, flags, banners and drawings, all in the same black-and-white palette of immanently revolutionary poverty and found materials. White reindeer in profile, with rectangles of white bedsheet fixed to lengths of twig to form their bodies and spines, their faces narrow triangles of cardboard painted white with vaginal notches for mouths, and more twigs, some still bearing dead leaves, stapled on for antlers, poke their way into a gallery of the damned interspersed with tokens of salvation. Black-suited bald company men as dancing marionettes jostle against circular sun discs with black rays like mushrooms, 18 more boot flags, a little train of Jersey cows on their way to the slaughter, handless, footless figures writhing on the floor, scenes of expulsion from Eden, half-coherent prophetic writings, prison towers filled with prisoners, arms cradling infants, and a stone face surrounded by jet planes.

A line of left hands, the curve of their palms theatrically exaggerated to allow them to wave and bless simultaneously, float horizontally across the right side of the room, just under the ceiling; on the left side, around the door leading back to the atrium, a few right hands give back a satanic salute. (Behind the Shatterhouse, a second room called the Shatterer Chapel & Library is filled with hand-drawn artist’s books and more walls as compulsively decorated as a Tantric temple’s; roughly concurrent with this show is an exhibition of Mr. Schumann’s and Bread and Puppet’s publications at Printed Matter in Chelsea.)

Most of these figures are painted with a hasty instrumentalism. They’re vividly expressive but minimally rendered, more like letters spelling out an urgent prophetic message than portraits in their own right. So it’s hard to know just where to stand when looking at them: How do you consider from a critical distance what amounts to a heartfelt rebuke to critical distance?

But Mr. Schumann lets his painting flower more openly in the hands of benediction, in a giant boot with human toes, and in several huge papier-mâché reliefs, some of them attached to one another to make sculptural triptychs that stand on long wooden branches fixed into the corners. Two of these repeat over and over a scene of two parents, with small children and a baby in arms, trembling as if before judgment or an executioner; it’s hard not to think of the last century’s European charnel houses. And in one, a potato-shaped male face with a long, flat nose wears an expression not quite of wisdom but of indomitable endurance. Adjoining him is a darker face with more developed features, his mouth slightly open, as if in shock or about to spring to action, and surprising little spots of royal blue in his eyes. But it’s all too much: The third face, behind these two, has his eyes shut and covers his mouth with his hands. (Through March 30, 2014)