TRENTON – The Senate Republicans closed ranks Monday and would not vote to override Gov. Chris Christie’s veto of a bill banning pig confinement. The vote was 24-11.

At that point sponsor Sen. Ray Lesniak (D-20) requested a roll call. Then Lesniak requested it be held.

That bill that once passed the Senate 29-4 with bipartisan backing lost that support on today’s re-vote despite a gallery full of supporters of the animal-rights legislation.

But many GOP yes votes did indeed switch to no.

The bill, which would prohibit confinement of gestating pigs, is not even currently practiced in New Jersey, according to the best guesses of some bill supporters, but was seen as a pre-emptive strike against companies elsewhere that practice it and may eye New Jersey as a new location for business as other states also ban the practice.

Lesniak has ripped Christie’s veto from the outset, claiming the governor has an eye on a presidential bid and appeasing the National Pork Board that is headquartered in Iowa, which hosts the first presidential caucus.

He said today that it was about standing up for the vote cast earlier this year, about opposing pork products produced in an inhumane manner, “there is no reason for a pregnant sow … they are confined 80 percent of their entire life … they can’t roll over.  They can’t stand up. They can’t turn around.”

His comments drew several rounds of applause from supporters in the gallery. 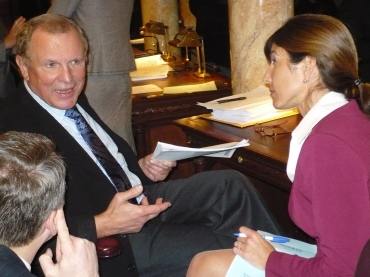