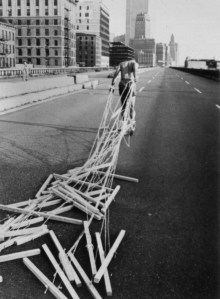 A joke, credited in the “Radical Presence: Black Performance in Contemporary Art” catalog to the young artist Simon Fujiwara, might summarize how one feels after a recent week packed with Performa-related events: “How many performance artists does it take to screw in a lightbulb?” “I don’t know. I left halfway through.”

Two shows, one at the Studio Museum in Harlem and the other at Grey Art gallery at NYU, both stem from a single “Radical Presence” exhibition, curated by Valerie Cassel Oliver for the Contemporary Arts Museum, Houston. Together, they showcase black performance art spanning three generations—from the Fluxus and Conceptual projects of the early 1960s to contemporary art. Even for audiences exhausted in the wake of Performa, both shows merit a close look.

At the Grey Art Gallery, the exhibition features the historical roots of black performance art from the 1960s until today. David Hammons set up a blanket on the streets of New York to sell snowballs in the conceptual project Bliz-aard Ball Sale (1984). Photographic documentation is all that remains of the ephemeral event—the objects ostensibly for sale melted, perhaps a comment on the hard-to-market quality of performance itself as an art commodity. William Pope.L’s Eating the Wall Street Journal (2000) has the artist eating pages of the newspaper with milk and ketchup; the sculptural, quasi-papier-mâché quality of the remains are just as scatological as you might imagine. A letter by Adrian Piper is on display, requesting that the curator take down her seminal video The Mythic Being (1973), in which she dresses as a black man and walks the streets of New York (the video is readily available to view on line). Ms. Piper asks instead to be included in a “multiethnic exhibition” about performance art, a reminder that the notion of “blackness” the curatorial premise rests on is not monolithic, nor is featuring work in the context of black art always desirable to artists.

“Radical Presence” is also accompanied by several happenings. At Grey Art Gallery, as part of Performa, I attended one in which the artist Benjamin Patterson recreated the 1962 performance Pond, a rule-based game featuring several dozen wind-up toy frogs. On Nov. 14, three performers at the Studio Museum activated Senga Nengudi’s sand-stuffed nylon stocking sculptures, evoking both the presence and absence of black bodies. 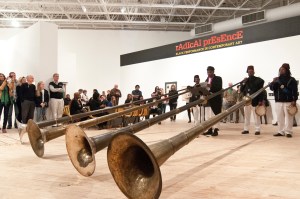 Uptown, the second part of the exhibition was ably overseen by Studio Museum Assistant Curator Thomas J. Lax. Mr. Lax has chosen to focus on new art, and the residue of recent performances haunt the space. In Tameka Norris’s Untitled, the artist runs a knife through a lemon and cuts her tongue. Streaks of blood-stained saliva rim a wall like a gruesome Rothko. It’s hard to look without wincing. Clifford Owens’s presence is felt in both venues in his “Anthology” works, in which black performance artists create short text pieces for the young artist and scholar to enact. The works create a multigenerational conversation. Videos originally made for YouTube by Jayson Musson in the character of Hennessy Youngman, a self-styled video art pundit, take the notion of black performance into the digital age.

(The Studio Museum in Harlem portion of the show is only somewhat overshadowed by the very exciting “The Shadows Took Shape” exhibition also on display at the museum, which features artists working with what it terms “Afrofuturist aesthetics.” Taking Sun Ra as a point of departure, the stylish show explores science-fictional and utopian, futuristic fantasies in the visual art of young figures like Cristina de Middel, Khaled Hafez and Wayne Hodge and was organized by Naima J. Keith and Zoe Whitley. There are numerous cyborgs with Afros, psychedelic video works and photos of women in burkas posing with alien Egyptian gods. The whole thing is very nouveau Octavia Butler.)

“Radical Presence,” featuring 36 artists, sounds a note of critique to recent museum exhibitions—the otherwise excellent “Rituals of Rented Island” currently at the Whitney Museum among them—that remember the conceptual and performance projects of the 20th century as white-only affairs. For much of American history, the black body itself was seen as a provocative departure from the white, straight “blank slate.” The fact of performance art authored by black artists has a resonant political import. “Radical Presence” is all too apt a title for a duo of important shows that, until Piper’s proposed multi-ethnic exhibition comes about, put on view hard-to-find work that is part of a canonical performance avant-garde. (Through Dec. 7 at Grey Art Gallery and March 9, 2014, at the Studio Museum) —Maika Pollack