Assemblyman Chris A. Brown (R-2) said over the airwaves Wednesday morning that the popular Republican governor and the South Jersey Democratic power broker had an understanding ahead of the recent election. Brown said the incumbent governor who sailed to re-election in November did little to help raise money for South Jersey Republicans.

The assemblyman made the comments during an hour-long interview on the morning talk radio show Hurley in the Morning on WPG Talk Radio 1450 AM, hosted by Harry Hurley.

“What he said was that Gov. Christie made a deal with George Norcross and the Democrats and that he did not raise money for the Atlantic County candidates,” Hurley told PolitickerNJ following the interview.

Hurley defended Christie’s campaigning efforts on the air for down ticket candidates, though Brown stood firm in his opinion that the Republican governor didn’t do enough.

Brown discussed with Hurley how Republicans were well out raised by their Democratic counterparts in the legislative district 2 races.

The lawmaker later told PolitickerNJ that he never intended to suggest that Christie struck a deal with Norcross and said he has nothing but appreciation for the governor.

“I have not listened to the hour-long interview but that is certainly not what I meant,” Brown said. “I know during the majority of the interview I expressed my appreciation of the governor and his efforts to revitalize Atlantic City and how he changed the dialogue in Trenton.”

Brown won re-election and his running mate, Assemblyman John Amodeo, is down by less than 40 votes. Republicans are seeking a recount.

Northfield Mayor Vincent Mazzio is up over Amodeo.

Christie and Norcross were known to be associating ahead of the election.

About three weeks ahead of the November election, PolitickerNJ reported on Christie sharing a moment with Norcross during an October Eagles game.

A photo was tweeted of Christie locking arms with Norcross during an Eagles match-up against the Dallas Cowboys.

Also in the picture was Democratic political consultant Neil Oxman, a founder of the Philadelphia-based The Campaign Group. 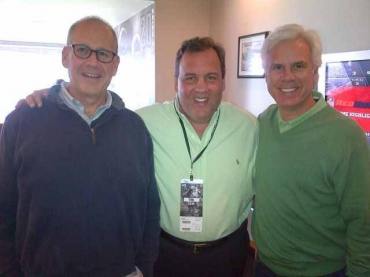