Toronto Mayor Rob Ford has been generating plenty of headlines lately, but the biggest news seems to be that the U.S. actually cares.

Toronto’s infamous crack-smokin’, oft-sweating mayor has made waves in the past week for such admirable feats as talking about oral sex on live TV, and bowling over a charming little old lady in city council.

But during the past five days I spent visiting my glorious hometown, there was one Rob Ford story that seemed to dominate the local news networks: that Mr. Ford is being mentioned on American late night comedy shows.

“After weeks of controversial remarks, shocking news conferences, it’s no surprise that Toronto Mayor Rob Ford has been all over late night TV,” proclaimed CBC news anchor Suhana Meharchand, at the start of an entertainment segment I watched over the weekend. “A Rob Ford parody even kicked off Saturday Night this past weekend!”

It wasn’t just CBC; CTV and CityTV, along with a number of radio stations, all seemed to be furtively covering the “Rob Ford-makes-it-to-American-TV” beat. (For those of you under the impression that Canada has yet to adopt television, CBC, CTV, and CityTV are all major Canadian news networks). From the comfort of my mom’s couch in Toronto, I watched countless Canadian journalists report (somewhat excitedly, I sensed) on Mayor Ford’s mentions on David Letterman, Jimmy Kimmel, Jay Leno, Jon Stewart, Stephen Colbert, and Saturday Night Live.

And it’s not just the late night comedy shows that Canadian are excited about; here’s a four-minute segment from CityTV about Mayor Ford’s appearances on U.S. news shows:

“It feels like they spend 10 minutes on that subject [every day] for the past two weeks now,” said a very credible Toronto resident and frequent local news-watcher, who also happens to be my mom.

I called her this morning (yep, we have phones, too) to chat about Toronto’s coverage of Mayor Ford’s late night presence. Five minutes after hanging up, she called me back. “I just turned on the radio in the car and they were reporting on exactly what you were just asking about!” she said. “They were saying how Jimmy Kimmel was going on last night about Rob Ford on his show!”

In Canada, even a mention on Jimmy Kimmel is big news. 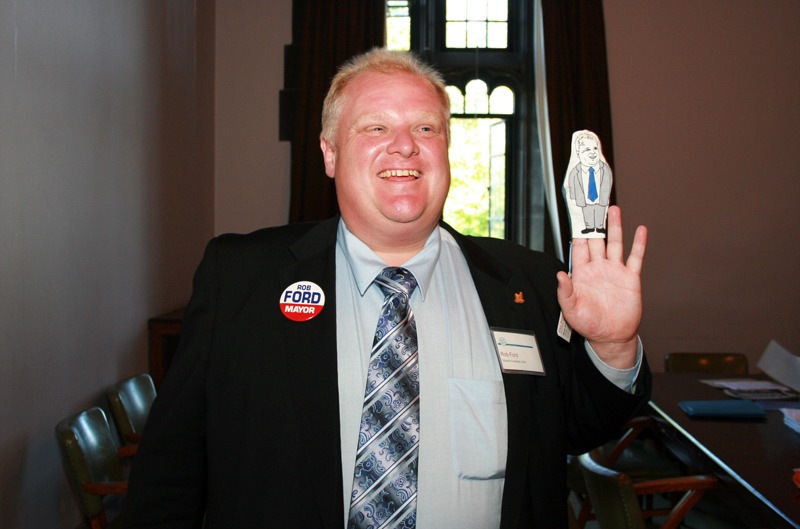