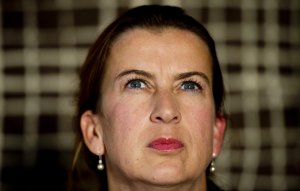 The director of the Kunsthal museum gives a press conference about the thefts. (Getty Images)

Reuters reports that the leader of a Romanian gang that stole works by Picasso, Matisse, Monet and Gauguin has received a six-and-a-half-year sentence. The works were stolen during a burglary earlier this year at the Kunsthal museum in Rotterdam.

Three out of the seven works are believed to have been destroyed in a fire. Read more details here.