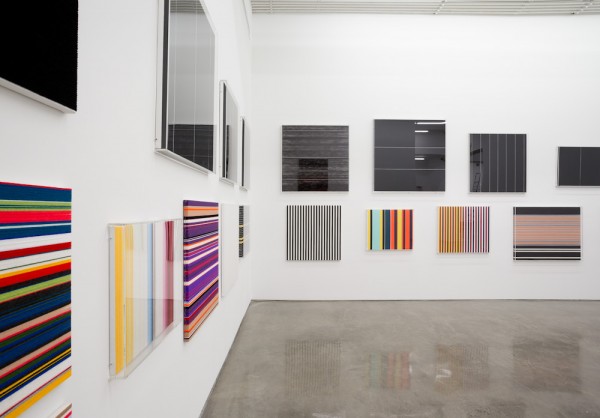 Rosemarie Trockel’s new work is as charming and cryptic as ever. The German artist’s 2012 New Museum survey, which she helped curate, included her work among a constellation of so-called outsider artists, obsessive practitioners of craft. It was hermetic and opaque and captivating.

For her sixth show at Gladstone, her first in seven years, she has gone bracingly barebones. About 30 of her signature wool pieces line the walls. She makes these with nothing more than wraps of yarn, so naturally they are pretty much all abstractions based on thin bands of color. Very Warm for May (2013) has alternating raspberry and black yarn, Beach Cabana (2013) is a kind of hyper-abstracted beachside scene, and Black Cab 1 (2011) has nothing but black, its yarn pieces spaced out so that their fuzz colors the transparent sections between them. It’s inexplicably creepy. You can think of them as arch rejoinders to Gerhard Richter’s recent high-tech “strip” paintings, experimental models for generic fabric patterns, fragile color studies or invitations to plumb unspoken feelings about textiles. They’re all of those things and more.

There are also wall-mounted casts of meat and two pieces that resemble twin sofas and a chair. They’re covered in plastic, as if work is still going on in the room; an unfinished quality permeates the exhibition. In so much of Chelsea, slick finishes and disquieting size reign supreme. Ms. Trockel is a potent antidote. (Through Dec. 21)