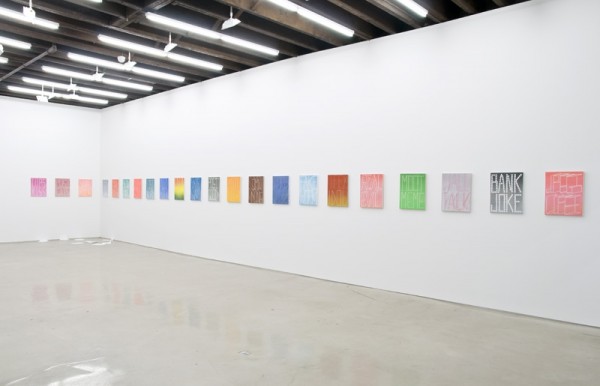 Here’s a nice surprise. Scott Reeder, the Detroit-based painter best known for brushy, pleasantly sloppy figurative work, has returned for his sixth show in New York, his first with Lisa Cooley, and it is a handsome, focused, bracingly cool affair. Some 30 small paintings from his text-based series line one wall, each with a lusciously glowing background and a phrase made of two four-letter words spelled out in a variety of tall characters: “sexy wind” against peachy pink, “free acid” on a green-to-orange gradient, “iffy idol” on a sunset worthy of Ed Ruscha, the progenitor of such linguistic magic. They go down as smoothly and pleasurably as a tiki drink, at least until you start thinking about those idioms and coinages, which often conjure absurd, maybe even sinister, half-images: “bank joke,” “temp monk,” “real evil.”

Less interesting are large paintings that Mr. Reeder makes by setting swirls of pasta—variously dry and cooked and alphabet-shaped—on canvases and laying down paint. They lack the punch of the all-over abstractions they send up, not to mention his smaller pieces. However, a razor-sharp painting with a long list of “alternate titles for recent exhibitions” alone justifies the entire show (“Abstraction for Beginners” is a favorite, while “Bad Art in Good Taste” could actually describe some of his earlier work). And just when you thought you wanted a decade-long moratorium on new trompe l’oeil sculpture, Mr. Reeder winningly scatters about sheets of paper (aluminum painted white)—some crumpled (Bad Idea, 2013), some fresh (Paper, 2013). They’re casual monuments to terrifying events in an artistic practice—the blank page and the failed attempt. However, as the paintings hanging all around confirm, Mr. Reeder’s continues to flourish. (Through Dec. 22)