Kean was not focused on the next political iteration of himself but on protecting what he has right now – the job he has held for the last six years.

He was calling nearly every Republican senator in his caucus and asking for his or her support for another term as leader.

He got 11 out of 16 names on a letter that was issued Wednesday.

Christie tried to quash that effort today when his operatives directed Republicans to change leadership in the state Senate from Kean to Senator Kevin O’Toole (R-40), a shift that would have toppled the reign of the chamber’s most enduring aristocrat and rewarded a loyal backroom Christie soldier with a rep as the Republican caucus’ most skillful political mechanic.

Kean sought a meeting with the governor around 11:30 a.m. while O’Toole waited in the wings.

The minority leader pushed back, and used as his security the list of supportive caucus members to keep the powerful governor at bay.

Christie didn’t break knuckles, allowing the caucus its own will, and in the end, the vote was Kean 10, O’Toole 6.

The caucus controversy today in the aftermath of Tuesday’s election came after months of internal wrangling over strategy between the Christie Campaign and Kean, who headed up the Republican effort to win more Senate seats and went 0-5 on Tuesday night despite Christie’s 22-point victory at the top of the ticket. Each side blamed the other for that outcome, with Kean’s allies irritated over Christie’s political decision not to antagonize South Jersey Democrats and the Christie Team frustrated over Kean’s inability to see opportunities elsewhere.

Many agreed that said Kean was hamstrung from the start. “It’s a terrible map,” Monmouth County Republican Chairman John Bennett told PolitickerNJ.com, referring to the dimensions of GOP influence dictated by 2011 redistricting.

But the map wasn’t all that worked against Kean.

The son of Christie’s mentor, former Gov. Tom Kean, Sr., the minority leader’s style and priorities nevertheless often clashed with Christie’s. Kean found himself fighting with the Christie Administration over the Open Space Initiative, for example, which the Senate minority leader wanted and Christie shunned. Kean radiates cool detachment as a matter of public breeding alongside the ferociously political governor.

It was never a natural fit.

This time, Kean fought an ally of the governor’s, another blue collar political animal, who happened to be on the other side of the aisle, but who has played a critical role in helping to shape the glide path of the nationally aspirant Christie even as he nurtures his own post-Christie designs on the governor’s office.

When Kean made a decision in the last election cycle to prioritize LD3 as a target to acquire a Senate seat and the home district of Senate President Steve Sweeney, he pitted himself not only against Sweeney, but against Christie.

Kean played in those South Jersey districts where Team Christie did not wish to put resources. The governor and South Jersey Democrats had reached numerous agreements during his first term, on labor projects, including the Revel Casino project in Atlantic City and the restructuring of Rutgers-Camden.

But Kean didn’t get along with Sweeney, the leader in the Legislature of the South Jersey Democratic delegation, and based on Sweeney’s recent past performances in elections, he saw an opportunity to go onto the Senate president’s turf and rough him up – maybe even catch him cold with Christie at the top of the Republican ticket.

There was a defining moment in March when the two men uncomfortably shared a stage at a Morris County Chamber of Commerce luncheon.

As they passed back and forth a microphone the static wasn’t coming from the mic alone.

Democrats in the Legislature have not moved on meaningful ethics reform, he said. They haven’t moved on sick leave reform. And he panned Sweeney for denying state Supreme Court nominees Dave Bauman and Bob Hanna a timely hearing. “They deserve an up or down vote,” said the Senate minority leader.

Sweeney came off his stool bristling and telegraphing his own party’s 2013 general election ad messaging. “Wow,” he said, saying the sloganeering must have been muddled on Christie’s ad paying homage to the efforts of the GOP executive and the Democratic Legislature.

“Democrat reformers,” Sweeney maintained, then stabbed a jab at Kean.

Six weeks in front of the general election, Christie’s handlers told Kean to stop making it about Kean versus Sweeney, a source told PolitickerNJ.com.

They didn’t want state GOP resources going into districts 1, 2 and 3, and down the stretch of the campaign played harder instead in LD 14, 18 and 38.

The argument among proponents of Christie’s model is that if Kean had focused more of his attention and money on those districts and stayed away from South Jersey, the GOP could have unseated state Sen. Linda Greenstein (D-14), Pete Barnes (D-18) and state Sen. Bob Gordon (D-38).

After a year-long brawl with Kean, Sweeney crowed at the end of Election Night.

“He has to explain to his people,’’ the Senate president said at a packed Auletto’s Caterers, as quoted by PolitickerNJ.com reporter Bill Mooney. “He spent $1 million against me. I’m glad he did,’’ Sweeney said, adding that had the GOP spent money elsewhere maybe it would have picked up the seats it said it would.

A day later, Christie on the subject of the GOP caucus said he was committed to Sweeney and added, “Elections have consequences,” according to PolitickerNJ.com reporter Mark Bonamo.

Kean was already in hustle mode.

“He hasn’t even called Senator Inverso yet to thank him for running,” a Republican complained, who heard of Kean’s Wednesday morning Senate GOP caucus self-protection overdrive.

Part of Kean’s argument to members was that Sweeney of all people shouldn’t be the one dictating leadership to Republicans. His colleagues agreed, and some of the senators told him without equivocation that he could use their names in a letter declaring support.

But others said that while they support him, they made it clear that if the governor wants someone else, they would rescind their support and back the governor’s choice.

Kean pleaded with state Sen. Diane Allen (R-7) for her signature as he tried to muster a majority in the caucus.

Allen said she sympathizes and supports Kean in general. She hated the notion of Sweeney bullying the caucus away from Kean and refused to be party to anything resembling a Democratic Party slam of the GOP caucus.

But she would support an alternative to Kean if the name came from Christie.

In the words of one caucus member, “We all understand what we learned in high school civics class about co-equal branches of government, but this governor is the leader of our party.”

Christie made his move, but it was too late, as a majority of the the caucus stood with Kean.

Sources close to the governor argued his political logic in wanting O’Toole.

He wants to make nice with Sweeney, but by opting for O’Toole over Kean, the governor expressed interest in tapping a longtime ally, and the man in the Senate he routinely relies on to serve as his chief political operator and intelligencer.

Yet what gave the governor a high finish of bipartisan luster statewide also worried GOP caucus members in Trenton.

It was O’Toole, more than any other single person, who finessed Christie’s relationship with the governor’s two chief Democratic Party backers and leaned on them in the clutch to ensure their naional news-making endorsements: Essex County Executive Joe DiVincenzo and state Sen. Brian P. Stack (D-33).

But O’Toole finally is loyal to Christie, and from the start of the governor’s tenure has made Christie’s political agenda his top priority.

That wasn’t enough to sway the majority of senators away from Kean.

According to one Republican source close to the process, not only were members worried about empowering Sweeney, but they felt they had given their word to Kean when they signed his letter.

There might have been time for a swap-out if Kean had not hurriedly gathered signatures of support, a source said.

Another source told PolitickerNJ.com that Sweeney kissed away a Kean capsize when he took to the stage Tuesday night and announced the senate minority leader’s political burial.

“He should have kept his mouth shut,” a GOP source said. 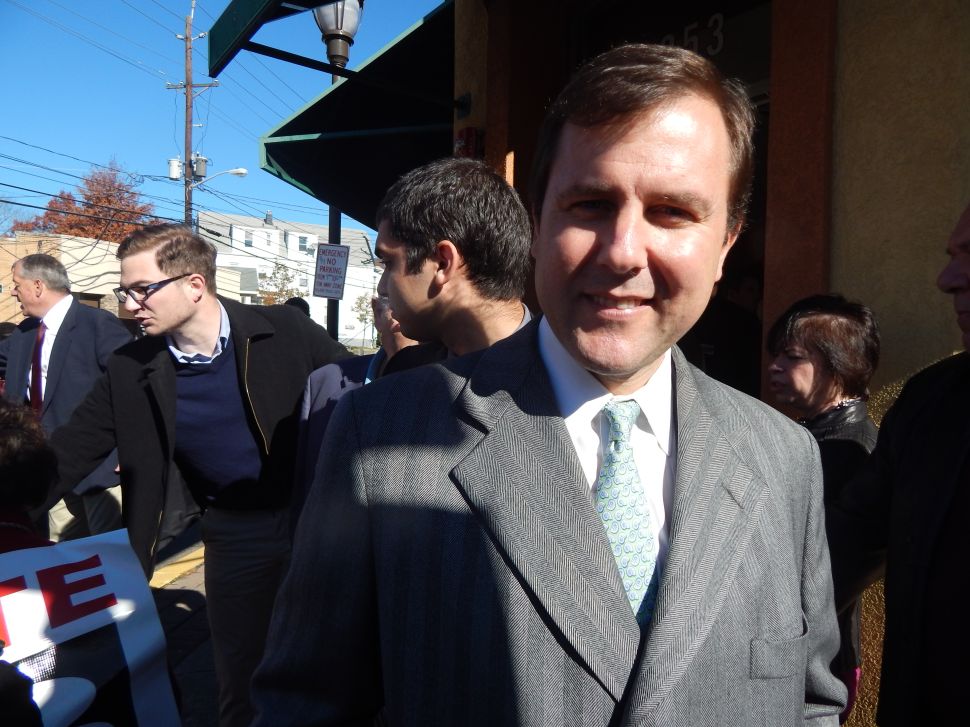