The message of Suzanne Collins’s YA series, The Hunger Games, seems pretty straightforward: Poverty is bad, capitalism is bad, having children fight each other to the death is bad, “reality” celebrities are bad, The Capitol and District 1 (maybe 2) are kind of bad, having nice clothing is bad, Peeta sucks.

But since Catching Fire and its subsequent sequels confuse that point with a bunch of other stuff (mostly CGI) corrupt the best of intentions, the original book’s themes can get kind of lost.

But that’s why we have Sesame Street to break it down for us.

[youtube=http://www.youtube.com/watch?v=eT7nD02Im5E&w=560&h=315]
“We all know we need to eat food to win The Hungry Games,” says Cookie Monster. This would be just another delightful Sesame Street homage to popular culture (like their Homeland sketch several weeks ago), if it wasn’t being echoed by actual sponsors of the film, such as Subway. At the very least, Sesame Street seemed to catch the subtler Judeo-Christian aspects of the film that the restaruant chain seemed to have missed. Although I do hear they’re planning a promotional deal featuring five flatbreads and two fish patties for only $4.99. #WhatVictorsEat 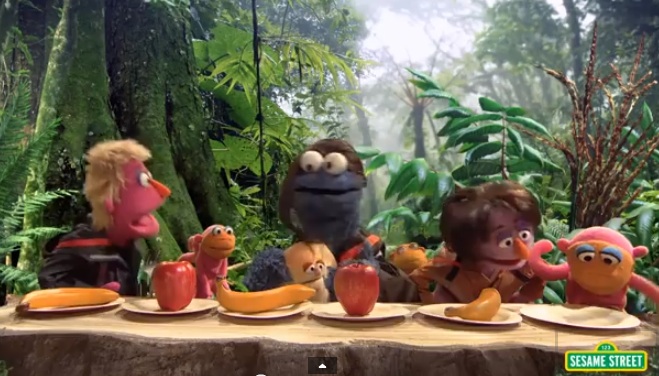