The entrance of attorney Bill Hughes, Jr. into the CD 2 race has kickstarted the rumor mill around incumbent U.S. Rep. Frank LoBiondo (R-2).

The most persistent scuttlebutt is he’s done, but the chairmen of the Cape May Republican Party and Atlantic County GOP say that is simply not true.

“I’ve personally spoken with Congressman Lobiondo (pictured),” said Chairman Michael Donohue. “He’s gearing up to run. He’s ready for all comers and so are we. The rumors are all false. He’s running for re-election. No one should underestimate how committed the congressman is and how committed we all are to him.”

“He’s absolutely running and thank God he is because we need him to continue to serve,” said Keith Davis, chairman of the Atlantic Republicans.

South Jersey sources say Tea Party Republicans are preparing to take a snap at LoBo before Hughes, who’s already announced – or state Sen. Jeff Van Drew (D-1) – takes a run at him, but Donohue and Davis said the congressman is too strong. 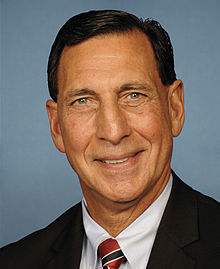