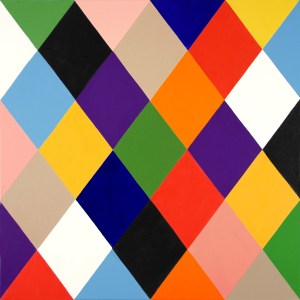 Stephen Westfall excels at self-effacement. He divided his 2-foot-square oil painting Djinn, for example, into six regular columns and each column into 14 broad stripes braided downward into an alternating double herringbone pattern, and then he painted each full or partial stripe its own color. His palette is bright and quintessential—immanent indigo, perfectly moderate yellow and orange with a capital “O,” as well as blue, black, orange-red, white, off-white, peach and green—but he applies it in so many monastically painstaking layers that the surface is as plastery as the tomb. But as with the presence of God in the world, if you see it at all, you see it everywhere: It’s the harmoniously intuitive arrangement of colors that creates Djinn’s wit and music, and this wit and music suffuse the whole even as they are impossible to pin down to any one part.

Harlequin diamonds, more broad stripes laid down at a mason’s honest angles, supercharged “deformations” as in coats of arms and subtly distinct but equally supernatural variations on the palette continue in the rest of the show. Rosewood is darkened, as if with centuries of smoke; High Plains, a fractal-like arrangement of blue, yellow and white triangles with red, black and green triangles inset, veers across the Atlantic into the New World; and the 6-foot-by-6-foot Time Tells Us What to Do, divided diagonally into exactly 32 squares, demonstrates what it is to see an infinite number of concurrent patterns at once. (Through Dec. 28)