If you flew commercially this Thanksgiving, you probably weren’t expecting an especially comfortable experience. And I bet you didn’t have one.

Amid such lowered expectations, it is interesting to see airlines changing how they communicate with customers.

The mainstream passenger experience is now about opting-out of services to preserve value. Airlines have adapted their messaging to manage these consumer decisions.

Their new pitch is: if you had a lousy flight, the problem is you.

I flew early on Thanksgiving Thursday, and noticed that United Airlines had three opportunities to reach me through its media. The first was at the interactive check-in kiosk, followed by more passive encounters with its in-flight video and house magazine, “Hemispheres.”

Checking in at a kiosk presents a significant messaging challenge to airlines, and is the reason why the flight experience begins negatively for many customers. That’s because the kiosk is all about up-sell.

After paying $25 to check one bag, I was presented with three additional opportunities to spend money. They included $77 for additional inches of economy legroom, $1,100 for an upgrade to business class, or a mid-price move to “Economy Plus.”

The unpleasant reality for modern air travelers is that once you’ve bought and paid for your ticket, you’re still only mid-way through the transaction.

What followed was a pretty uncomfortable flight. No bin space meant my bag was at my feet, the guy in front reclined his seat all the way to LAX, and there was nowhere to put my legs.

But rejecting the upgrade options available at check-in established a sense of culpability for these problems. If I were uncomfortable, I thought it was because I had opted out of the $77 (or $1,100) solution.

It was my fault.

The next opportunity for the airline to message customers was its pre-flight video.

Here, United touts its new fleet with improved passenger amenities. The best part is flight attendant Teresa Brink, who explains the new cabin lighting system “can be changed during the flight to ‘sunset,’ which kind of helps everyone relax.”

Ms. Brink clearly has many years’ experience dealing with passengers who aren’t relaxed. She betrays a touch of PTSD when she says, with nervous satisfaction, “that’s my favorite feature, really, on the plane.”

Remember, the problem is you.

In-flight entertainment options have expanded so dramatically in recent years that most people may not bother with “Hemispheres,” United’s magazine. That’s a pity, because it’s quite good. The November issue has some diverting lifestyle features plus an interview with Malcolm Gladwell and a serious story on Muay Thai boxing in Thai prisons.

But the first page of editorial is a “CEO Letter” from United boss Jeff Smisek, and he does a pretty good job of trying to lose us. “Aviation Tax Reform” is his subject, and good lord.

The “17 different taxes and fees that the U.S. government imposes on air travel,” costing “nearly $19 billion last year” is a legitimate industry concern, of course. But Jeff sounds petulant when he complains that “land, sea, car, rail and bus travelers pay little or nothing.”

Is he suggesting that Washington should tax motorists in order to make the airlines more competitive? Good luck with that, comrade.

Left to win us over, on the next page, is flight attendant Heather Adams, who is profiled for her golden touch with cranky passengers.

“Some customers board having already had a bad day,” explains the article. (Maybe because the check-in kiosk just tried to upcharge them $1,100?)

“For each person who comes through the door, there are things we just don’t know,” Heather adds, diplomatically. She tells the story of mollifying an angry passenger whose family was not able to sit together.

Again, the message seems to be that customers are problems who have to be managed. So it’s lucky we have people like Heather looking after us, right?

Wrong. This level of service is not for you, pilgrim:

“Adams has spent most of the past decade working United’s ‘p.s.’ premium service flights, jaunts connecting New York with San Francisco and Los Angeles that are often packed with celebrities and tech firm executives.”

Not a celebrity or tech exec? Then if you find yourself at the bottom of the heap, it’s because you relentlessly self-selected to be there.

The airline says, nil service is your own choice.

All but lost in “Hemispheres” is a small article about November being National Aviation History month.

The common experience of flying is now about opting out of services to maintain the face-price of your ticket. Which is ironic, because in real terms the value of flying has never been greater.

My west coast return ticket this holiday weekend, unadorned with upgrades, cost $350. That’s barely 5% of the real price 82 years ago.

Jeff, that should have been the subject of your CEO’s letter. 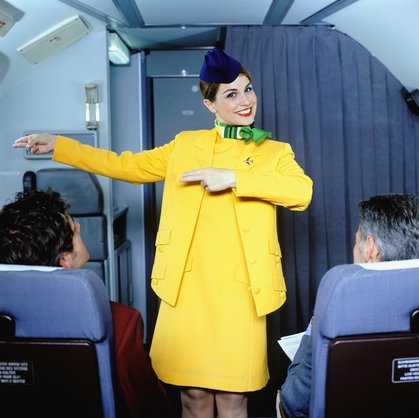