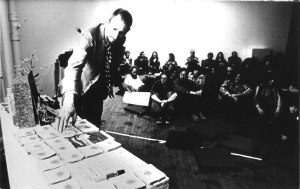 Over four consecutive evenings in April 1974, curator and Art-Rite co-editor Edit deAk staged a program at Artists Space titled “PersonA” with what today reads like a dream lineup: performances by Laurie Anderson, Scott Burton and Adrian Piper, screenings of films and videos by Eleanor Antin, Kathy Acker and Dennis Oppenheim, and a whole lot more.

Jack Smith also performed, and J. Hoberman describes the wild scene in a footnote for his essay in the richly illustrated catalogue that accompanies “Rituals of Rented Island: Object Theater, Loft Performance, and the New Psychodrama—Manhattan, 1970–1980,” which is now on view at the Whitney. (Mr. Hoberman consulted on the show, and just got a new job with The Times.) From the essay:

Smith closed the “PersonA” performances, appearing last on a bill with Adrian Piper (who distributed written texts from her Talking to Myself: The Ongoing Autobiography of an Art Object) and Dennis Oppenheim (who showed selections from his films on video). Appearing in a jacket and tie, Smith delivered a rambling, glacially paced monologue entitled “Life With Mekas,” indicting the brave new world of grant-subsidized art. Complaining that “money is granted to the most aggressive,” Smith proposed that “foundations” build a papier-mâché stairway from which artists might hurl themselves, awarding money to those who rolled down “most impressionistically.” Smith stood behind a table decorated with green dollar signs and, as he had done three months earlier at the Onnasch Galerie, sold signed pieces of bread for a dollar. “Artists Space was too straight for Jack,” deAk would later say.

Two points here: (1) that’s how you do institutional critique, and (2) always read the footnotes. I have to admit that I did not when I first read the catalogue, but curator Bradford Nordeen came to the rescue by sharing it on Instagram. Thank you, Mr. Nordeen.