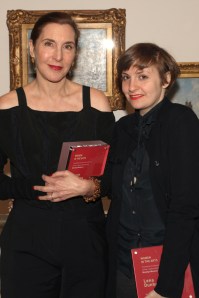 Laurie Simmons and Lena Dunham at the Women in the Arts fundraising luncheon. (Photo: Patrick McMullan)

Earlier today, the Brooklyn Museum held its eleventh annual Women in the Arts luncheon. This year’s event honored the artist Laurie Simmons and her daughter, filmmaker Lena Dunham, the first time a mother and daughter were honored together by the organization. Here are some excerpts from their onstage conversation:

On Lena using Laurie’s biography in her work

LD: Yes, that’s been a point of contention [between us], that I tend to think of her history as my history.

MODERATOR: Were those actually your diaries in the film?

LD: Yes, and we also used them as props.

LS: I think I’m a much more private person…I know that’s a funny thing to say, a strange thing to say with a daughter like Lena Dunham. She has attempted to wrest so much personal information from my life and my past—that’s been the point of tension in our relationship. It’s like you’re living with a journalist. “How many people did you sleep with?” No, no, no.

On the art world

[A clip is shown of Lena’s 2009 satirical internet video series Downtown Delusional Divas, in which she and her friend Isabel Halley, daughter of the painter Peter Halley, play ditzy young women trying to make it in the art world.]

LD: The art world isn’t historically, maybe, open to, or fond of making fun of itself and it seemed like people were excited and refreshed by it…art students especially… [To her mother]: Did it embarrass you?

LS: I remember there was someone Lena wanted to meet for [Delusional Downtown Divas]. I said, “You want to meet her? Go over and introduce yourself.”

LD: I don’t think that ever happened.

LS: The entire art world could be reduced to a New Yorker cartoon. That’s what we all know and have to live with. It’s a very fragile ecology. … It’s not that easy to get and it’s easy to make fun of. So I respect the balance Lena found between silliness and sheer absurdity and seriousness.

On Lena participating in Laurie’s photography

LS: I couldn’t find women who would scale properly so I used Lena and Isabel [Halley].

LD: And she gave me lice that day.

LD: Isabel came to the shoot with lice. We’d been sharing a hairbrush all day. We had ornate hairdos. Her mom called later that day and said, “By the way, Isabel has lice.”

LD: I was eight. You described the fantasy [in the picture] to me as “He wants to get hugs from two women.”

MODERATOR: How do you feel about seeing your daughter naked in Girls?

LS: That’s not the first time I’ve had that question. I think it’s tougher for her dad. I’m a fan of the show. But I think lots of times where there are things that confuse me…I feel like generationally there are things that are not available to me to understand…Progress has to be made and Lena—we are not just looking at some vacant pornography. There is so much going on in the series and so much for girls to think about. [But] I am the mom. There are things that one naturally, humanly does not want to see but I try to look at the big picture.

MODERATOR: Do you feel protective, defensive?

LS: I feel protective in terms of the kind of attention – the thing that happens that you never understand until you have a celebrity in the family. I feel really protective on the street. I think it was much easier in the days when everyone came up and said, “Can I have your autograph” Now everyone wants a picture. So there’s a group of ten people putting their arms around her and doing selfies. I feel like, “That’s my baby!”

A shared sense of humor

[A clip is shown from Ms. Simmons’ 2006 film The Music of Regret, which shows Meryl Streep lying on a beach singing a duet with a ventriloquist dummy. It prompts laughs from the audience.]

LS: I was really surprised, when we started screening the movie, that people laughed. That’s always been an issue with me and my work. Things that I see as maybe melancholy or poignant often have humor but I’m almost the last one to know.

LD: I feel the exact same way. I started doing comedy because people kept laughing at things I thought were dramas.

LD: She really invited me in and it was a huge impetus for me to start making films. She made the process look so joyous.

LS: Actually I needed your help. I appeared on a set one day and 60 people were on the set and my producer was my current art dealer Jeanne Greenberg Rohatyn. It was like jumping into a freezing cold swimming pool. We were writing things as we went along and I really – Lena has this amazing verbal gift and visual gift, and I needed her help. I’m being quite serious about that. It wasn’t just, “Come be on my set.”

LD: She was able to embody a character who, while retaining some of her characteristics, was a completely other person. … A lot of it was this exercise in telling this different version of your own life. It’s funny to write a narrative that bears technical resemblances to your reality but is not your reality.

LS: I’m still so proud that I remembered my lines.

LD: My sister, who was at the time 17, had much better things to be doing. She was running for Model Congress and applying for college. It was this exercise in devotion that both these women with incredibly busy, productive lives of their own made space for this project that in turn made space for my life to come. So I’m endlessly grateful.

LS: I love [acting]. I sometimes wish I had a parallel life where I had 30 years of that experience. I don’t have the language or background—I’m so far from having expertise in it.

LD: Since then I’ve worked with many actors, many of them highly professional, and she has amazing instincts. I have great relationships with other actors but we had a connection and communication about what was needed that I always miss. She wasn’t just easy to communicate with because she’s my mother. She was easy to communicate with because she’s very skilled and understood the world I was trying to create.

LD: I don’t talk to other people like that…. We destroyed the floors in our family home. And I feel sorry for that.

LS: Younger women [who saw the film] thought the mother was cold and ungiving and not very warm. I heard the word bitch used a lot about that mother. But women my age related to that mother and having the struggle of being a single mother and keeping things together and keeping her family together and maybe having less tolerance for a daughter who was freeloading and drinking her wine and trying to take advantage of her and trying to sweet talk her.

LS: That was really fun. To play the other side.

LD: It wasn’t even my idea to cast her. We were trying to find someone for the role of punishing art dealer and I was pitching all kinds of crazy cameos and someone said, “Isn’t it obvious that mother should play that part?” And all the moments in these scenes that people called out as their favorite part were things she generated. She brought this to life. … Having her on set in this capacity was amazing. It really struck people on the crew—there are people who have an inability to connect their parents to their adult working life. Seeing us collaborate, even when there were moments of goofy self-conscious tension was really good for people to see. To see a mother and daughter working together in that way. I always thought my mother and I had the best ability, of anyone I know, to see each other as a pair of competent adults.  And then I went to an event where Hilary and Chelsea Clinton were speaking together and it really made us look like shit. They literally spent the entire time saying, “My mother is the smartest woman.” “Oh, I wouldn’t say that, Chelsea. It is absolutely you in the family who has inspired…” And it doesn’t seem like a weird act. But maybe there have been events in their life that have brought them closer.

LD: They’re really good. We need to go home and get it the fuck together.

LS: The art dealer was so broadly evil. The role that you wrote. And I completely rewrote that. The thing about [the art world]—there is such a subtle but obvious passive aggressive…everything is done with a smile. … It’s a subtle cruelty.

MODERATOR: Do you remember your mom coming to feminism, or discussing it ?

LD: She was part of a group in New York called WAC, Women’s Action Coalition that was a downtown feminist group dealing with, right after abortion became legal, trying to keep that accessible and easy and trying to clear some of the stigma around it.

LS: I took you to Washington for a couple things and I did clinic defense in Buffalo.

LD: She introduced me at an early age to concepts of equality and gender equality that I really carried with me and that have been a huge part of my identity. … I had this armor…Educating young women about feminism, even before teaching them about sex, is an important aspect of raising our daughters.