As Mayor-elect Bill de Blasio ramps up his search for new hires, the rumor mill is spinning with names in the running for plum administration posts.

According to conversations Politicker’s had with a wide range of insiders, names being bandied about include City Council members, advocates, and even an actress from Sex and the City.

While Mr. de Blasio has yet to name a full transition team, members of his inner circle are engaged in back-channel conversations with candidates Mr. de Blasio would like to hire. At the same time, various interest groups have been testing the waters, throwing out names they’d like to see on the incoming team, which is likely to include a mix of existing staffers, experienced government pros and the kind of well-seasoned D.C. operatives who helped run his campaign.

The team has also been reaching out to staff at the public advocate’s office, asking what they’d like to do in the new administration. “They’re trying to take care of everybody,” one source said.

Below is a list of some of the names we’ve been hearing.

Top Advisers: Mr. de Blasio is likely to keep his inner circle close as he begins the most important job of his career, according to observers. This notably includes Emma Wolfe, the former Working Families Party organizer who joined Mr. de Blasio in 2009 to help run his campaign for public advocate and went on to become his chief of staff and deputy mayoral campaign manager.

Dominic Williams, his current chief of staff, is likely in the running for something as well.

Carol O’Cleireacain, a senior fellow at the Brookings Institution, who served as the city’s former New York City budget director and finance commissioner under Mayor David Dinkins has been mentioned as a possible budget director.

Another name being floated for budget director or deputy mayor for operations is Anthony Shorris, currently a senior vice president at New York University’s Langone medical center. Mr. Shorris has a wealth of government experience; he previously served as the executive director of the Port Authority, the city’s finance commissioner and deputy budget director.

Former Port Authority chief Chris Ward has also been floated for deputy mayor of operations, according to Crain’s New York Business and NY1.

But there are also dozens of other positions fill, from press aides to top commissioners:

Press: Wiley Norvell, the public advocate’s press secretary, is expected by some to move to the mayor’s office–a much larger operation than Mr. de Blasio’s current government shop. He could be joined by Phil Walzak, Mr. de Blasio’s campaign’s senior communications advisor, who has experience working for everyone from President Obama to the Department of Homeland Security, and potentially other press aides who have been working with him in recent months.

Police: Thus far, the talk of whom Mr. de Blasio will choose as the next police commissioner and next schools chancellor have dominated the headlines, with three main names put forward to run 1 Police Plaza: former Police Commissioner Bill Bratton, Chief of Department Philip Banks III and First Deputy Police Commissioner Rafael Pineiro. Mr. Pineiro has been making a public case for his candidacy as the first Hispanic police chief.

Education: The schools list is even longer, with names including former Baltimore schools chief Andres Alonso, state Board of Regents member Kathleen Cashin, Carmen Farina, who worked with Mr. de Blasio when he served on a Park Slope school board, and the current chief academic officer, Shael Polakow-Suransky.

Housing: There has been some speculation that Mr. de Blasio, the former regional head of the U.S. Department of Housing and Urban Development, will want to shake up the Department of Housing Preservation and Development–potentially putting it under the same umbrella as other building agencies to achieve one of his central election promises: Add or preserve 200,000 units of affordable housing over the next eight years.

Among the names that have been discussed as contenders, according to the Wall Street Journal, are Adam Weinstein, the president and CEO of the nonprofit Phipps Houses and Shola Olatoye, the vice president of Enterprise Community Partners, an affordable housing organization. Crain’s included Michelle de la Uz, executive director of the Fifth Avenue Committee to their list.

Culture: Several interesting names are being floated to head up the Department of Cultural Affairs, including Cynthia Nixon, the former Sex and the City star who was one of Mr. de Blasio’s earliest and most vocal campaign supporters. Another name that has come up: Randall Bourscheidt, the president of the Alliance for the Arts, who served as deputy commissioner of cultural affairs for New York City in the 1980s.

Pat Kaufman, who currently serves as executive director at New York State Governor’s Office for Motion Picture and Television Development, is considered a prime choice to replace Katherine Oliver at the Mayor’s Office of Film, Theatre & Broadcasting. While Mr. de Blasio has praised Ms. Oliver in the past–he recently told The Observer that,“If there was one commissioner I’d like to keep if I was elected mayor, it’d be Commissioner Oliver”–sources expect her to step down at the end of the year.

Transportation: The Journal suggested that Mr. de Blasio might be inclined to replace Transportation Commissioner Janette Sadik-Khan with another high-ranking member in the department. Among the names they floated: First Deputy Commissioner Lori Ardito and Manhattan Borough Commissioner Margaret Forgione.

Parks: Brooklyn Borough President Marty Markowitz has been proposed for the post of parks commissioner, according to Fox 5. Another unlikely name rumored to be seeking the post: State Senator Daniel Squadron, who recently lost his bid for public advocate. A spokeswoman for Mr. Squadron said it was the first she’d heard of any such rumor.

Fire and Sanitation: While Mr. de Blasio has made it clear he wants to largely clean house, it’s not unusual for some to remain on the job. Sanitation Commissioner John Doherty, one of the city’s longest-serving appointees, is reportedly looking to stay on, as is Fire Commissioner Sal Cassano. “In the FDNY, we have a great team, so let’s see what happens with the new administration,” he recently told NY1.

Democratic State Senator Liz Krueger, one of Mr. de Blasio’s early supporters, has been repeatedly floated as a potential candidate for his administration. According to the New York Post‘s Page 6, she has already been tapped to serve as first deputy mayor or deputy mayor for health and human services–but her spokesman has denied the reports. “Sen. Krueger has neither discussed nor asked for a position in the new administration,” he recently told Politicker.

Brooklyn City Councilman Brad Lander, the co-chair of the progressive caucus who has emerged as a dominant force on the council, is being talked about as a potential cabinet member–perhaps deputy mayor for economic development. The councilman did not respond to a request for comment.

Gladys Carrión, the current commissioner of the New York State Office of Children and Family Services has been floated as a potential deputy mayor for health and human services.

Peter Madonia, the current chief operating officer of the Rockefeller Foundation, previously served as chief of staff to Mayor Michael Bloomberg after serving as senior adviser to his campaign for mayor, who has reportedly been serving as a close adviser (along with former Clinton aide Harold Ickes and John Banks III) is expected to be considered for a top slot. 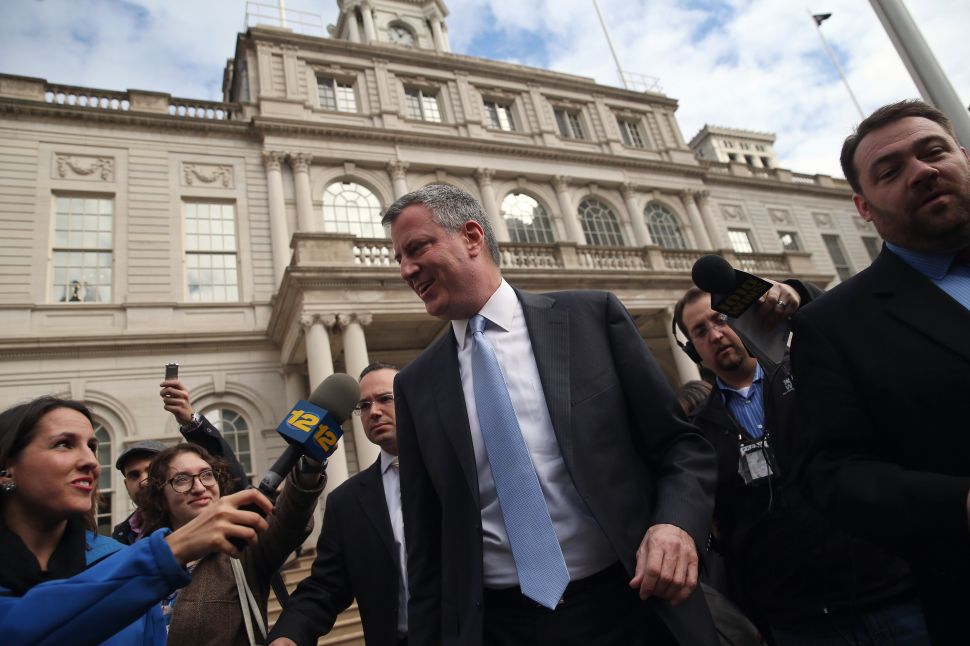